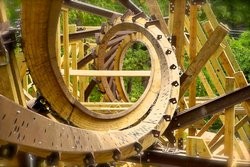 Anyone within the coaster enthusiast community knows about Outlaw Run, the new wooden roller coaster that’s about to open at Silver Dollar City in Branson, MO. It’ll be the first wooden coaster to three inversions, including a double barrel roll. On top of that, the layout will feature many elements virtually unknown to previous wooden coasters including some cartoon looking, 90 degree banked airtime turn. Most coaster fans are squeeing at this notion. Hell, I’d be lying if I didn’t think it looked exciting.

Outlaw Run doesn’t seem to be some one off novelty coaster either. Currently two other wooden coasters are being retrofitted to include inversions into the layout. First we have Rattler at Six Flags Fiesta Texas, set to become Iron Rattler, which is not only  getting an inversion but won’t even be a wooden coaster anymore. The track is being replaced by steel, effectively making it a steel coaster. The second coaster is Hades at Mt. Olympus Theme & Water Park. The coaster, now known as Hades 360, will remain wooden but have a zero-G roll added into the layout.

So, we have three wooden coasters (well, two, but the general public will say Iron Rattler is wooden) with inversions in 2013. One has to speculate if this trend will continue with newer wooden coasters and if other companies will jump on board. I’m not saying having the occasional looping woodie is a bad thing but if it’s going to stifle the design of more traditional wooden coaster layouts, then I have a bit of problem. 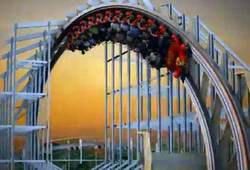 Now, if wooden coasters start to incorporate inversions and other predominately steel coaster elements, then why not just build a steel coaster? They do these things better already! I get it, “looping wooden roller coaster” is a great marketing strategy right now, but if this fad explodes, then inversions on wooden coasters will become pedestrian. At that point, a park would either need to up the ante with four, five, six, etc inversions or just build a steel that does the same damn thing, only with cheaper maintenance.

I like wooden coasters. I like them because they’re different than steel coasters. Because they have a rough and tumble, out of control feel. Because they don’t need inversions to thrill riders! But like I said, if we see an Outlaw Run style coaster pop up occasionally (and I stress occasionally), then I don’t have much of a problem. At least with Outlaw Run, the layout plays into the inversions with crazy dives and strange twists. If we start seeing more “hey, lets slap a loop on this wooden coaster” treatments, à la Hades 360 (or this, or this) then I do!

I don’t know, what do you all think about inverting wooden coasters? I might just be an ol’ negative Nancy on this issue. Honestly, what’s the worst that could happen if these looping woodies take off… 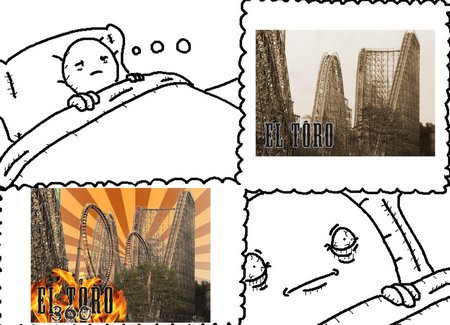