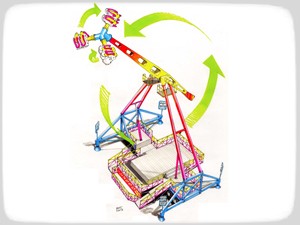 Well, well ,well; it’s about time the US got a nice new carnival ride from Europe! Nemesis 360, the first KMG Inversion ride in the US, debuted at the IISF Trade Show in Gibsonton, FL last month and is now starting to travel the fair circuit starting with the Strawberry Festival in Plant City, FL.

Nemesis 360 was purchased by Tim Casper of  PBJ Happee Day Shows at the 2009 IISF Trade Show. The ride is kind of like an Evolution meets Freak Out meets Experience. Riders are situated on a hub with three sets of seats, carrying four riders per set; the seats are also able to flip freely but are typically locked in place. The hub is in turn attached to an arm that can complete 360 loops.

The ride starts out by having the arm swing from side to side in attempt to complete a loop. While this is going on, the hub holding the seats begins to revolve at a slow to moderate speed. Once the arm completes a loop, it’s all momentum afterwards as the arm continues to complete fast loops while riders experience substantial hang time at the top and crushing Gs at the bottom. As noted before, the seats can also flip, but rarely do as the ride has been noted to be incredibly intense with the added motion.

Your best bet to see Nemesis 360 is if you’re in and around the state of Arkansas, as it’s the main traveling area of Happee Day Shows. However a second Inversion has also been purchased by Mike Demas of Demas Enterprises, and may appear at the Minnesota State Fair in August.

The following video was taken by YouTube user vinceroye. It shows the Nemesis 360 in action at the 2010 IISF Trade Show.