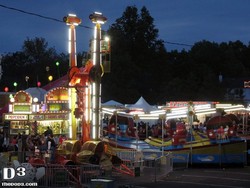 There’s three major events in New Providence, NJ. The largest is arguably Our Lady of Peace’s annual fair. Man, I’ve probably been going to this fair for over 22 years now. It was kind of hard to miss since I went to OLP’s school in my younger years. When the fair would come around, I’d basically stare out the windows in class, watching the buildup instead of doing stuff like, you know, schoolwork. The fair spanned four days, from May 15 to the 18th and featured rides from Blue Sky Amusements. The ride lineup changed a bit from last year. The fair had: 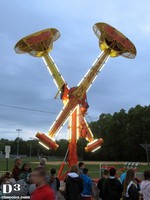 Nice setup as usual by Blue Sky Amusements. It’s nice to see that they changed the lineup a bit as the lineup has been the same for the past few years. One of the notable additions was Dragon Loops, an Eyerly manufactured Loop-o-Plane ride. I honestly haven’t seen a traveling version of this ride in years. The last time was probably at the OLP fair before BSA started running the show! Dragon Loops is certainly one of the nicer Loop-o-Planes I’ve seen with dragon art on the pods and flame art on the arms. Seems like the ride uses electric motors as opposed to the gas engines that the old ones have. It also seems to use a joystick to operate rather than the large levers that gas powered versions use. 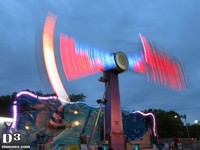 Tilt-a-Whirl was another “new” addition; it was actually at the fair in 2009. I noticed that the ride op would vary the speed frequently during the cycle to get the pods spinning. Riptide had a massive line on Friday night and Saturday evening. I bet a lot of fairgoers see Riptide as the “big” ride since Zipper was removed from the lineup. It’s a pretty spectacular looking ride for a medium sized fair and its got some height. It may even fly as high or higher than the Gondola Wheel. 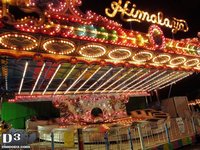 Another ride that had a consistently large line was the Wisdom Himalaya. The ride had new cars this year along with some blue and white chaser lights along the ceiling. I actually didn’t know anything was different until stumbling upon a photo of Himalaya from last year’s fair. The blue and white lights are much nicer, I think. Not only does it give the ride a tinge of blue, which fits the snow theme, but it also balances the lighting which makes photos look great right off the bat! The ride featured strobes, music, siren, and rarely an air horn. 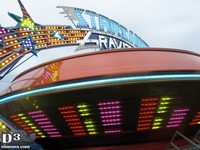 Other rides didn’t differ much from last year. One completely minor note was that they setup the stairs on Starship Gravitron to the side, I’m guessing to keep the line from clogging up the midway. The line still ended up all over the place on busy nights but the queue of people didn’t just jut straight out, across the midway…so, I guess it worked. I also saw (heard?) that they were occasionally playing …check that, brostep, on Starship Gravitron. As much as I can’t stand brostep, the combination of madly flashing lights and seizure inducing, robotic crapola was quite a sight to behold. 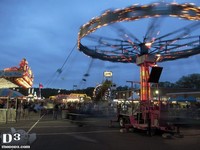 Another amazingly minor detail was that Super Slide was positioned in the opposite direction. Oh man, this trip report is getting exciting now! I also noticed the brand new Cop Ride near the school. It looked like fun. Riders get into the pod and it rises up into night! Unfortunately, ride tickets didn’t work; you needed a police or security badge to ride. Maybe I should have tried to gain admittance by flashing my PBA card.

I ended up going three of the four days. I think the longest I stayed any one night was a little over an hour. I usually bike to the fair during the day on Saturday but it was cold and I didn’t feel like sliding across the asphalt (again) thanks to the off and on drizzle that day.

All right, I have some photos for you all!

And here’s a video featuring the rides. If you’re quick, you can catch where I used clips from last year! Uh, I mean…they’re all from this year…