The local carnival at Our Lady of Peace church came around a little earlier this year, happening the first week in May as opposed to its usual mid-May week. It worked out all right though as each day was warmer than average with only Thursday night seeing some rain. The rides were brought in by Blue Sky Amusements and the fair had… 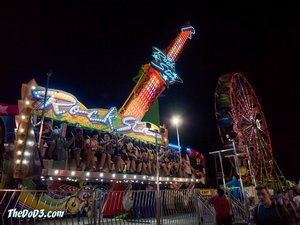 I went to this fair three of the four nights. Well, more like two and a half as Thursday night I just met up with my father to grab some burgers and zeppole. A storm blew through like 10 minutes after we sat down to eat and the crowds thinned out a little after that. I was originally going to bring my camera that night, but after seeing the rain coming decided to just get photos and video the following nights. I headed over on Friday and Saturday for maybe an hour each night. Both nights had good crowds when I arrived and seemed drop off around 9pm.

There were some new rides at the fair this year. First and foremost was an ARM manufactured Rock Star, a new ride for BSA in 2018 with OLP being its first spot. The ride was so new that it probably hadn’t even been christened by vomit up to that point. Sounded a lot quieter than their old Riptide ride; don’t know if that’s because of its newness or due to some mechanical differences between the two models. 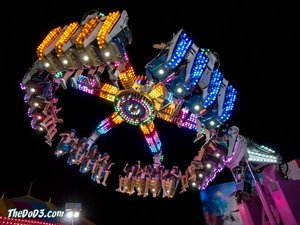 The second new ride was Spin Out. You don’t see these too much at carnivals! This particular Spin Out had multicolor lighting along with some strobes. The backwall featured surfing scenes and no signage, leaving the name kind of up for interpretation.  Looked like they would alternate the direction of rotation each cycle.

The final new major ride was Paratrooper, an upright Hrubetz model that had been refurbished by BSA this offseason. The ride looked spectacular with sequenced LED lighting on not only the sweeps but the parachute bonnets. Unfortunately, this ride was SBNO for the duration of the fair. I really want to see this ride in action sometime. The fourth addition was Boomers Pirate Ship, a small funhouse placed near the games area around the other kiddie rides. 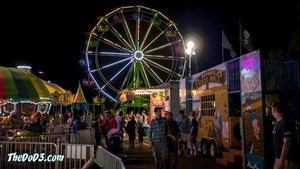 Not new, but Sizzler made a return this year. Last year BSA had an Eli Bridge Scrambler at the fair. Aside from the stuff I mentioned, all of the other rides were at the fair last year only with their locations switched up. All in all it was a nice fair with a good variety of rides and additions. This fair has actually had a lot of variety these past several years with some rides switching in and out each year. The week change worked out quite well for OLP since this past week, the week the fair probably would have been, was rainy every day.

And a short video of the major rides.