The Our Lady of Peace parish carnival runs for four days each year in mid May. At one time it was three days but a forth was added possibly because each year there is one throwaway day which is marred by rain or storms; this year was no different as the first day consisted of an all day rain event followed by two fairly brisk days before finally getting a warm, dry day to close out the fair. Blue Sky Amusements provided the rides and some games for the X year in a row now (lost count!) The fair had… 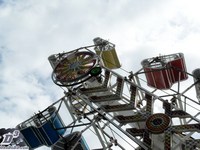 Zipper sported a massive line on Friday and Saturday night, partly because it was the only inverting ride at the fair and partly because it loads pretty darn slowly. Next door was a Watkins Swinger, a pretty run of the mill swing ride that can rack small enough for practically a sedan to pull it. It ran pretty fast compared to most swing rides I’ve seen lately; it was also the fastest to start tearing down soon after 11pm on Sat.

On the other side of Zipper was a Wisdom Himalaya which is a big step up from a Venture Mini Himalaya but not as impressive as a Musik Express or other full sized Himis; of course a full sized version A. racks on more than one trailer and B. is just freaking big. Scooters was the next ride over; not much to say about them other than that you got a nice waft of grease or whatever the heck that smell is when near them. 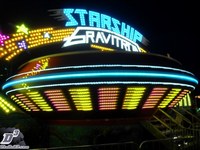 Next to Round Up was another centrifuge based ride, Starship Gravitron, a brand new Wisdom Starship 2000. This was actually the ride I was most looking forward to seeing after reading a post about it on Matt’s Carnival Warehouse. The ride was fully souped-up with LEDs set to wildly flashing sequences and an electric orange ship with some glitter thrown in. It’s one of the best Starship 2000 rides I’ve seen, right up there with Reithoffer’s “Starship 2000” and Morey’s Piers’ “Cygnus X-1.” A video of the ride can be found in a previous post. 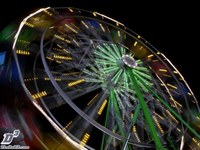 A Wisdom Sizzler was next on the midway. It seemed a bit darker this year with some of the lights not turned on or something, I can’t really place my finger on it. It did run really fast compared to other Sizzler rides however; the sweeps holding the cars actually spun faster than the main boom. Riptide, an ARM Ali Baba with a better theme, anchored the back right side of the midway. The ‘Rip’ in Riptide was not working on the days I went which resulted in hearing “let’s go on the Tide!” more than once from random carnival patrons. Finally, a medium sized gondola wheel sat near the front of the midway which sort of served as a backdrop for the row of games set up closest to the school.