Finally! The first fair of 2010! I was first tipped off about this carnival back in 2007 or so and have gone on to miss it every year since due to its early date. Also, it’s not exactly a well advertised fair, not even Middlesex Borough’s website mentions it. I’m not even sure who runs the fair to be honest, I just call it the “Middlesex Carnival.”

I arrived at the fair at about 8:10 and parked down one of the side streets across from Mountainview Park, where the fair is held. The fair was situated with concession stands in the front, adult rides behind them, and kiddie rides off to the right. The lineup was… 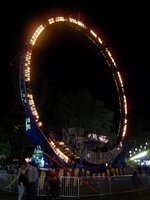 Maybe I missed them, but I didn’t see many games grazing the fair. Anyway, the Fireball was most likely the “big” ride of this fair and also commanded a very large line snaking around the left side of the ride. It looked in fairly good condition with a ton of sequenced turbo lights lining the loop, some of which were out but probably 95% were lit (excluding the part under the station platform…but who cares about that anyway?) I noticed the back side of the loop had an orange support while the front had a blue one to match the rides color scheme. Perhaps they replaced it in the off-season and didn’t get a chance to paint it? Nit-picking, nit-picking, I know…

Pharaohs Fury was  the other big ride at this fair and had a constant load of people streaming onto it with no real line. As with the Fireball, this ride looked fairly good with red and blue neon lights going down the supports, a pyramid ornament at the top, and lights along the boat. I never really got the whole Egyptian theme for a swinging ship though.

Just to the right of Fury was an older Hrubetz Hurricane. I actually have a photo of this same ride from 1996 or so and the color scheme and lighting hasn’t changed much at all. The center hub at the top looks like it has newer lights but the sweeps and center support have yellow and green tube lights. I like the tube light look, although the colors could be updated a bit; maybe purple and yellow or something. I also noticed that the panels around the bottom of the ride had names on them like Aimee and others. I’ve seen that before on some rides and, like the Egyptian theme for a swinging ship, never really got it either. 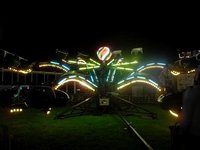 Scrambler was a Big Eli version with long yellow light tubes on each arm along with a red, blue, yellow and green color scheme. It wasn’t exactly a pretty looking ride with those Fisher Price looking colors but it did run fast! The Eyerly Spider on the other hand was a fine looking piece with black sweeps, large yellow bulbs on the undersides of the sweeps and light green florescent tubes on the top. Here the yellow and green did work! The ride ops also managed to load three sets of cars at once; that’ll certainly speed up the loading on a ride like this!

The Scooters, located just to the left of the Scrambler, were your standard portable bumper car affair, not much to say about em’. The Tilt a-Whirl was decent looking with a typical red, yellow and blue color scheme. At the end of one cycle, the ride op burst out of his little operating position, chiding a group of kids for opening the bar before the car had stopped moving.

Before leaving the fair I picked up a bag of zeppolies; $4 got me six wonderfully greasy, overly sugary delectables!