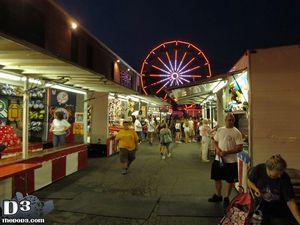 It’s amazing how many fairs happen close by that seem to fly under the radar. There’s a lot of towns close to each other in my area of NJ and as the years go by I’ve been finding out about more and more carnivals happening within a 10 mile radius. Kenilworth Fire Department Carnival is one of these new fairs for me despite being a 20 minute ride.

I headed over on August 22nd, leaving at about 8:15pm. Again, I pretty much just memorized the route and headed off. When in Kenilworth, I thought I had gone too far down one of the main roads and quickly made a right; turns out this was the exact turn I wanted! Mr Navigator over here is two for two now! There were a lot of “no parking” signs around so I ended up parking a block away. The fair was being done by Blue Sky Amusements and had: 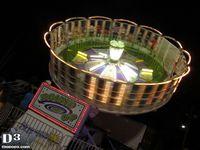 As you can see, it was a smallish carnival. The lot itself was pretty small and I’m surprised at how many rides BSA managed to squeeze into there. The layout was interesting with the rides setup in St Teresa School’s parking lot, games and vendors crammed into an alley between two buildings, and the beer garden basically on the school’s doorstep (of all places.)

The “big ride” was probably Himalaya, but who cares about that since BSA’s recently refurbished Hrubetz Round Up was there as well! The ride now has white, purple and green color scheme with pink and green LEDs along with florescent tube lights on the sweeps. The LEDs looked like they flashed to a certain pattern, but I’m having a hard time remembering just how they went…maybe I should have taken a video. 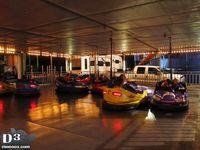 I watched Scooter for a bit while attempting to get usable photos. I’m starting to warm up to these smaller Majestic bumper car rides. If you get to ramming speed, or what could be considered “ramming speed” for those bumper cars, and slam into someone head on, then the crash can have a nice little impact! They slide a lot too, so T-boning a car near the back can spin the other car easily.

I did a few loops around the fair before leaving less than an hour after I arrived…but not before picking up a bag of zeppolies! My highlight while driving home was navigating one of those suicide U-turns on Rt.22 with a foggy back window. Boy, that was fun.