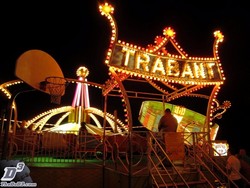 So I’m riding along one day near my sister’s place and I see a sign for a church carnival. This is how people found carnivals back in the day before the interwebs and for a carnival dork like myself it’s always fun finding out about a new one this way, especially when it’s close. I eventually did look up the fair online to see where exactly it was though and also to poke around for pictures to see if it was worth going to. I found that the fair was at the Our Lady of Mount Virgin parish in Middlesex, NJ; I also saw a photo of a Rock-o-Plane on their site, welp guess I’m going! The fair had… 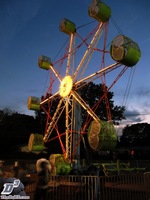 It was a pretty small fair but it also had three rides that I hadn’t seen this season. Ace Amusements provided the midway and had their rides packed into a medium sized parking lot. The first ride I saw, literally the first as it was peeking up behind the buildings, was the Eyerly Rock-o-Plane. It had a white, orange, blue and green color scheme with sequenced turbo lighting on the spokes and center. I waited around for the ride to start to take some long exposure shots but it took forever as the ride op was trying to load the ride to capacity on a slow night. In front of Rock-o-Plane was small swing ride, I want to say it was officially named Musical Chairs, possibly a Childress manufactured swing, but I have no idea. It was more of a kiddie swing than a family swing like the Watkins Swinger. I’d post a picture but of course I didn’t take a photo of it, what else is new? 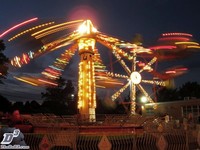 Hurricane, a Dartron model, took up a large space next to Rock-o-Plane; that ride has quite a wing span so it needs some room around it. The ride was painted mostly white with some yellow highlights and the word “Hurricane” running down the center support. I seem to remember the ride cycle doing the whole wave thing, then just rotating while the air tanks replenished before doing a second round of waves; this all amounted to a fairly lengthy ride. Fun Slide sat to the left of Hurricane however I didn’t notice anyone on the ride the entire time I was there; that’s strange as slides are usually one of the more heavily trafficked rides. 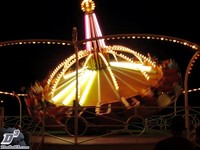 A Chance manufactured Trabant resided on the far side of the midway from where I entered. This was a late 60s, visually unaltered Chance model with florescent tubes, red and yellow turbos, center ornament, decorative perimeter lighting and even those round lighting decorations. This thing was old school as hell and looked fantastic. The ride went forwards and and backwards with the ride op varying the movements all throughout the cycle. Round Up was tucked into the corner and was running with only a handful of people each time I saw it in motion. 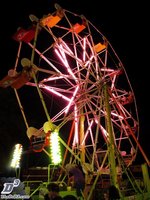 On the opposite side of the midway was an Eli-Bridge wheel with the words Hy-5 written on the side; I like that, now I don’t have to compare pictures to figure out what model it is. The wheel had pink florescent light tubes on the spokes and searing white lights on the decorations around the entrance. The result was this strange clash of pink and neon green (the supports were painted green) that looked like the ride had just been irradiated by the Chernobyl meltdown.

Aside from the rides the fair had some games and a row of food vendors, mostly food tables manned by church volunteers but my favorite, the Oriental BBQ stand, was present as well. The fair also had a money wheel for the ones who would rather win some cold hard cash rather than a stuffed animal or blowup baseball bat. I hung around for maybe 45 minutes before leaving, and that actually felt like a long time.