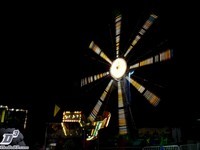 In the quiet suburbs of northern New Jersey, fairs and festivals are a welcome distraction from basically watching the grass grow. However while some town fairs come and go with moderate fanfare, the now 100 year old Feast of Our Lady of Mount Carmel Festival in Berkeley Heights, NJ rises above by being arguably the biggest event around…well, at least on the last day.

I went to the fair on the first night this year and was greeted by very few crowds; I’m not sure how many people knew that the fair went on for more than 3 days, which had been the case for years. The fair had a modest line up of rides and games; parked on the half grass, half mud field were:

This fair was just packed with WT carny rides! However, they all looked nice; something unheard of in WT carny ride-dom. For example, the Trabant had the lights surrounding the platform intact along with most of the other lights working. The Scat, a ride that’s normally kind of crumby looking, actually looked…good! It had multicolored strips of lights on the platforms and all working lights on the main arm. All of the other pieces followed suit looking very presentable for an older set of rides.

The rides were also run on pretty decent cycles for the most part; the exception being Hurricane which only did one cycle of swings with a lengthy spin up and spin down. Trabant was run on many different speeds and I believe went forwards and backwards, however the cycle wasn’t as good as Wave at the Corpus Christi fair. Scat had another good cycle, consisting of a short spin with the arm and platforms rotating in opposite directions before switching to everything spinning in the same direction.

The food stands were independent sellers for the most part with common fair foods like Italian sausages, pizza, burgers, etc. The games were pretty standard as well complete with a shoot out the star game, water gun race, and balloon dart games among others. The fair also had a large concert stage set up which had some cover group playing to a handful of people. 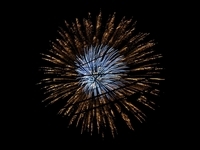 There’s a reason as to why this fair is such a big event and it’s due to the fireworks that occur every year on the 16th. The western section of Berkeley Heights turns into a Fourth of July type atmosphere with groups barbequing and people setting off consumer fireworks (which are illegal in NJ…those ne’er-do-wells.) Around 9 or so the main road is closed off as spectators (even some traveling from around the tri-state area) gather for the 11pm fireworks. Many people watch from around the town while some opt to go into the fair itself, which charges a $10 admission on that day.

The fireworks themselves have been done annually since the 1930’s by Garden State Fireworks. According to my sister, the Santore brothers of GSF were from the area which might be one reason as to why they pull out the big guns for a seemingly small event. The GSF website claims that they shoot off their “world-famous multiple break exhibition shells and rarely seen groundwork” during this display; I’m no fireworks enthusiast but it sounds good I guess!

The entire show lasted about 45-55 minutes with some pretty unusual fireworks. The video below shows a selection of fireworks including the entire finale. Some things I missed filming were the fireworks arranged to look like smiley faces, cubes, and letters as well as one weird firework that exploded into a bunch of parachutes holding strings of flaming stars.