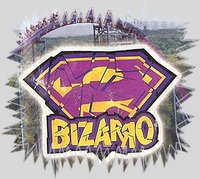 5/4 Update: Added a post with some construction photos of Bizarro at Six Flags Great Adventure. Check it out!

For months now, park fans have been wondering if the names of Medusa at Six Flags Great Adventure and Superman: Ride of Steel at Six Flags New England will be changing to complement the off season re-themeing of each coaster. Thanks to Dunkin’ Doughnuts (who by the way have great coffee and breakfast sandwiches along with their apparent inability to keep a secret) we now know the name to at least Superman: Ride of Steel and it’s bizarro…no really, it’s Bizarro! To the right is a scan from SFNE Online, which I shamelessly purloined from Screamscape. You can click the image to see the full sized, un-framed image.

So…Is anyone else with me in thinking that Bizarro just doesn’t fit a 200+ foot hypercoaster? Like I can totally see it being the name for a backwards standup coaster or something (because that would be bizarre) but a large coaster should have a name with more OOMPH! I also seem to think of the pizza chain Sbarro when I see the name Bizarro, but that’s a whole different story…

Who the hell is Bizarro anyway? (I really don’t know…I didn’t even know who Jimmy Olson was at first either!)

Here’s an illustration of Bizarro…

Apparently he is some steroid abusing freakazoid! Actually he’s an enemy of Superman who sort of looks like a combination of Superman, Joker, and Barry Bonds (you know, the steroid physique.) Appropriately enough, Bizarro is from Bizarro World, which is somewhere in Texas I think.

This begs the question, will Medusa get the Bizarro name as well (see below)? After all, both rides have a similar blue and purple color scheme. As we can see from the picture, those are in fact Bizarro’s colors. There’s been much speculation over in the GAdv Online forums that Medusa’s new name might be Monarch (yet another Superman villain), which seemed like a good name; however with these recent developments we may have two Bizarros on our hands!

Update: Medusa is going to be called Bizarro, it’s up on Great Adventure’s ride listing…unless this is an elaborate joke. Also, Bizarro is Here, a new website, has been found.

Another Update: Just saw this video over at Seetheride.com , which deals with the Medua/Superman:ROS transformations. It has Mark Shapiro among others talking about the rides, showing some of the features, and talking about their (kayfabe) dealings with Clawshun/LexCorp.

Yet Another Update: Both Bizarros are now open. Ride and try not to be turned into one of Lex Luthor’s minions.