September is a special time for some of us U.S. theme park fans. It’s the time when many parks announce their additions for the next year! Both Six Flags and Cedar Fair owned parks start teasing announcements in August, spurring copious amounts of speculation and wishing. Six Flags Great Adventure fans in 2015 were largely hoping for an RMC woodie, or a Giga coaster…possibly just the former as wishing for a Giga is practically a meme now. On September 3rd, 2015, we got our answer: Total Mayhem! An S&S 4-D Free Spin coaster that would be placed into the largely overlooked Lakefront area!

“Would be better if this wasn’t an exact replica of the ride six flags fiesta texas got last year. “

“It’s named Total Mayhem, which is already the name of a haunted attraction AND it has nothing to do with forests or lakes.”

“So…it really only has an 8 rider capacity? I’m rather terrified to see what the wait times for this will be. “

“I gotta’ say, Six Flags is really going “cheap” with most of the attraction’s. “

“Im not mad about it just disappointed”

Coaster fans were obviously overjoyed by the announcement. Hey, at least it’s not a superhero or villain, right? 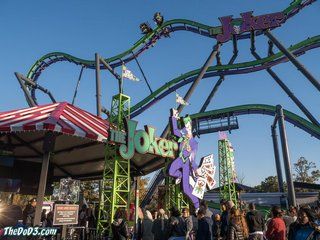 Construction for The Joker began soon after its announcement with the clearing out of two show venues: Fort Independence, an aquatics arena that featured diving and dolphin shows over the years, and Grandstand by the Lake, a venue that was originally used for water skiing shows before being opened basically once a year for Fourth of July fireworks displays. I was a little ticked that after all these years of going to the park that I had not once set foot in the Grandstand, but whatever. Their deconstruction took place during Fright Fest and Holiday in the Park events so folks going to the park regularly saw less and less of the venues with each visit.

As noted above, Six Flags decided to change the name to The Joker in January. They pulled this once before with El Diablo, the Larson Fireball addition in 2015 that was originally dubbed Looping Dragon and slated to be dropped into the Golden Kingdom area. I don’t particularly know the reason for the name change, but I’d like to think it’s because the manufacturers accidentally had two signs made and had some extra purple and green paint leftover from Six Flags Discovery Kingdom’s Joker addition.

The Joker officially opened on Memorial Day weekend, but not before a media preview day on Thursday, May 26th. As fate would have it, the ride was shut down for the day after leaving some riders stranded upsidedown as they came into the brake run; funny enough, it was the CoasterFusion guys who got stuck. Just a minor hiccup and they were quickly flipped right-side-up. 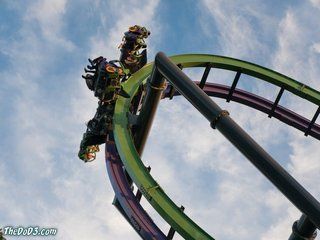 The queue for Joker is relatively minimalistic featuring a covered queue maze right off the bat that leads to a long path that spans the length of the coaster. When I first rode The Joker during the second week of Fright Fest, the line filled up the entire path but not the queue maze. The ride ops were banging out trains quickly and the wait ended up being about 20 minutes. Not as bad as I thought an 8 rider per train coaster would be. Before entering a row, an attendant asks how many are in your group and sends you to the front or rear side of the loading station depending on what would best maximize capacity.

The restraints are an overhead lapbar with vest style upper body restraints. They seemed comfortable enough. The restraints didn’t seem too tight either, despite being pushed down all the way. During the ride there are some moments where you’ll be shoved hard into the restraint and those moments don’t exactly feel all that pleasant. However, anything other than the vest restraint would just flat out hurt instead of just being uncomfortable.

Upon exiting the loading area, the train pauses briefly beneath the lift to let the preceding train clear the block section, and then up you go! The lift is pretty fast, only taking about 20 seconds to reach the top. The train crests the lift and the seats immediately roll forward on the small dip. It doesn’t feel like a natural flip at all, and that’s because there are a pair of magnetic fins up there that yank the seats forward. Similar fins are scattered throughout the course to coax the seats into flipping, including some on the lift that rock the seats a little.

The remainder of the ride consists of small bunnyhops and vertical turnarounds, referred to as “raven turns.” The seats are able to freely flip and every ride can turn out differently. On my first ride (front side, right/front seat), the seats did a front flip off of the lift hill and then hung upsidedown on the third dip before swinging around the turn basically face first and ending up upsidedown at the bottom. The second tier of track saw a lot of barely upsidedown moments with maybe one flip. The final turn and portion leading up to the brakes was entirely right-side-up. 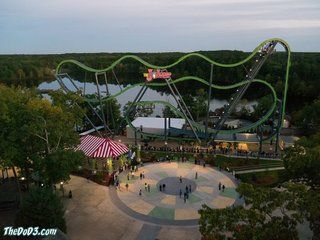 Joker is an interesting coaster. It’s almost not even a coaster but rather a glorified flatride. The free flipping seats and raven turns kind of reminded me of the Zipper rides that you see at fairs. Truth be told, I find Zipper not only more fun, but more comfortable than The Joker.

The length of Joker is a real shortcoming with ride time being just under one minute including the lift. At the same time, a version of this ride that was longer would certainly up the nausea level and result in less ridership. It’s really a no win situation. On the up side, the flipping ensures that the coaster really is different on every ride so it almost feels like a new experience on every go around. It’s also radically different than what many have seen up till now, which gives it some drawing power.

I personally rate The Joker 6.5/10. Maybe my rating will go up on additional rides but as I see it currently it ticks off the boxes of being different, looking cool, and being fun enough, but there’s really no meat to it. It’s kind of a gimmicky coaster overall.