Zipper is quite possibly the most feared carnival ride in existence. One might question if they are able to handle the total vertical assault of Zipper’s motion. Others may question whether this ride that looks and sounds like it was built from leftover parts is even safe to ride. However, those who dared to ride it are left with an unforgettable, and extremely exhilarating experience.

Zipper was designed by Joseph Brown and manufactured in 1969 by Chance Rides. The ride consists of a large rotating boom mounted on a support arm. The support arm is itself mounted onto a trailer which acts as transport when folded up and a counterweight for when the ride is erected. Free-rotating pods are pulled along the boom via pulleys. The movement of the pulleys is powered by two tire drives that run along the bull-wheels on either end of the boom. Older Zipper rides also utilized a tire drive to rotate the main boom; newer variants use electro-hydraulic motors.

The name ‘Zipper’ most likely comes from the shape and movement of the pods. I mean, ‘Zipper’ sure as hell couldn’t have been the name all throughout the design process…right? In any event, it’s a wonderfully nonthreatening name for possibility the most wild ride on the midway.

As far as appearance goes, the ride is coldly machine-like. A new paint scheme and LED lighting can make the ride more pleasing to the eye but there’s simply no hiding the unforgiving metal framework, spinning guide wheels, and flexing metal joints. The sounds generated by the ride cap off the holistic experience of Zipper. In full motion, the ride sounds like a cacophony of hundreds of rolling wheels, rubber-farting tires, electric whirs, and steel doors jingling as the pods tumble end over end.

In 2005 I saw this Zipper at the Meadowlands Fair. It was most likely undergoing a lighting rehab but its lack of lighting made its appearance amazingly threatening. Medieval torture devices have nothing on that Zipper. 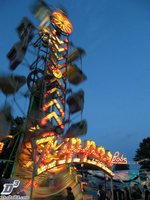 Riders hop into a pod and the door is closed and locked. The lapbar is on the door, which I’m sure is comforting for most riders. The door also features sets of padded bars. Riders must hold onto these unless they want their face to meet the door. After a lengthy loading process, the ride operator usually starts by just allowing the pods to move around the track. The ride along the boom isn’t exactly fast, but there is a whip-like effect when the pod travels around the bull wheel. The additional movement of the boom is when things start to get seemingly out of control. Both the pods and boom travel in the same direction and the combined movement is very forceful.

At full bore, riders generally have no idea where they are in relation to the boom or when they’re about change direction. Some riders may not even know if they’re rightsideup or upsidedown due to the constant rolling movement. Due to the random action of the free-rotating pods, no two Zipper rides are the same. For instance, one cycle could see minimal flipping while next cycle could see the same pod constantly tumbling end over end. I think my record for most consecutive flips in a row is around seven. 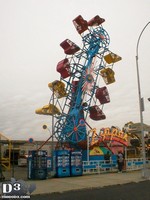 “The combination of its location, its condition, and the virtuosity of its motley collection of ride ops provided for an unsurpassed impression of peril. I’ve had several garden variety near-death experiences, including being hit by cars, attacked by dogs, mauled by farm equipment, and, once, grazed in the face by a bullet. Only two times, however, have I really considered myself to be on the threshold of a violent, ugly death. Once was on an airplane that appeared destined for a crash-landing. The other was during my first ride on the Coney Island Zipper. To feel, all at once, the fragility of the mortal coil is an intense, revealing experience. On the plane, I felt resigned to my fate and grateful that my brief life had in many respects exceeded my expectations. On Zipper, in the midst of a seemingly endless forward free-spin, I felt blind, animal panic; even though I knew the odds favored my survival, I could not bring logic to bear on the sensations I was experiencing. That’s something I probably won’t get to experience again from a $3.00 flat ride…” 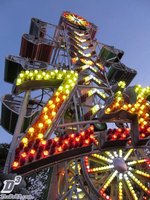 One Zipper ride worth noting was at a local fair; the Feast of Mount Carmel Festival in Berkley Heights, NJ to be exact. I was on it with my friend, who had never been on it before. He was screaming phrases like “we’re gonna die”, “oh my god,” and “oh shiiiittt” (ie. standard Zipper fare.) Midway through the ride, the entire contents of his pockets emptied into the pod, mostly coins. Every time we flipped some coins would hit us which prompted my friend to scream out “there are coins in the car! Coins…in the car!” The tone he said this in sounded as if the car were full of lit firecrackers rather than coins. To top it off, my ridiculously long wallet chain (back when I used to dress like some Hot Topic worshiping tool) got stuck in some crack between the seat and cage. I had to feverishly yank it loose or risk holding up the massive line.

Zipper rides are mostly found in the United States. They’re so popular here that nearly every traveling carnival has one. Conversely you almost never find them at amusement parks, most likely due to the slow loading. Australia, Canada and some South and Central American countries also have Zippers. European countries, despite their penchant for massive fun fairs and wild rides,  Nope, there’s at least one, complete with an over-the-top American theme.

In the past, concerns about the safety of this ride were warranted. Due to a design flaw the doors could, although rarely, be jostled open over the period of the ride. After a couple of incidents every Zipper is now closed using the normal latch, a redundant backup lock, and an R-key (it looks like a big bobby-pin) that blocks the door from opening in case both latches fail. Newer model Zippers have re-worked latches, eliminating the need for R-keys. They also feature heavier cars to reduce spinning, causing less stress on the doors…of course that also makes the ride less fun!

According to Ride Extravaganza, the first model Zipper rides ran at nearly twice the speed of today’s counterparts. I had always thought that none of these models existed anymore or were all adjusted at some point, however it seems that there is at least one left, albeit not a true Chance model. This video (*required viewing*) shows an Australian built Zipper that seems to go much faster than any other I’ve seen. It looks like an absolute blast! 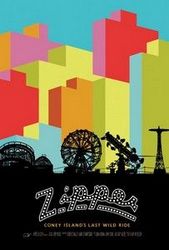 Zipper is also the focal point of a documentary by Amy Nicholson called ‘Zipper: Coney Island’s Last Wild Ride.’ The film tells about the famed Coney Island Zipper and how it, along with many other operators and businesses in the area, fell victim to the real estate land grab by Thor Equities back in the late 2000s, a topic that has been covered quite a bit here at The DoD3. Further, the film explores the changing face of Coney Island from a gruff yet charming community to that of one with an increasingly polished atmosphere with corporate interests setting up where decades old establishments once were.

Here’s some photos of Blue Sky Amusement’s Zipper. It’s almost hard to call it a white trash carny ride after looking at this ride but the WT spirit is still there I guess!