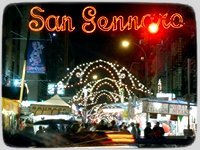 This could probably be listed as an ‘other’ trip report as it doesn’t really have many rides in it, but the atmosphere of the San Gennaro Festival in New York City is much like a carnival! The Feast of San Gennaro Festival is a street fair in New York City’s ‘Little Italy’ district. The festival lasts for nearly two weeks and features lots of food, vendors and games, among other things.

A yearly tradition almost, my sister and I headed over to check out the festivities. We decided to drive into the city, of course that’s always a bad idea. The Holland Tunnel cost $8 bucks to drive through and parking cost like $20 for the four hours or so we were there! Not only that but driving any length of road in Manhattan is annoying as hell; I think the train would be a better option next time. Anyway, we parked in Chinatown and walked a few blocks to Mulberry Street in Little Italy. It was about 5pm on a Tuesday and the place was fairly crowded already!

We entered via the de facto entrance off of Canal St; as soon as you walk in, you’re inundated by a strong aroma of Italian sausage. We left a little donation at the church right near the entrance, after all, this event is for a religious feast. The festival goes on for about six blocks or so with the first couple lined with temporary outdoor seating for the street side restaurants. The remaining blocks are mostly vendors, food stands and games.

The very last block had a Dunk the Clown booth set up with a really good clown spouting off insults one after the other. Even the guy working up front got in on the action, having one of the participants come behind the counter and right up to the target because “he sucked” so badly. The guy actually missed, despite being like 5 feet away; the clown proceeded to laugh hysterically at him. The guy, laughing as well, flipped him a fangul and left; oh yeah, we’re in Little Italy all right!

The fair did have a few rides located on a side street off of Mulberry. It simply consisted of a tiny carousel, kiddie swinging ship, Frog Hopper type ride, a medium sized ferris wheel, and a simulator which was being touted as “the roller coaster.”  I’ve seen the simulator in particular at a bunch of events, however this is the only one where it seems to be doing decent business. In the photo set above, check out the operator’s booth on the simulator; the guy at the controls was smoking a cigarette and like hotboxing the inside!

After walking the length of the festival, we stopped for dinner at one of the outdoor restaurants (it’s tough to get a bad meal in Little Italy by the way.) Afterwards I bought a bag of zeppolies and we left at around 8:30pm.