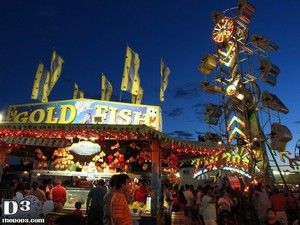 Which was first unintentional  but has now become deliberate, I went to the Feast of St. Anthony Festival at Our Lady of Czestochowa in South Plainfield, NJ after taking a year off from visiting. I first went in 2008, then again in 2010, then I happened to go in 2012 and then decided that I would not go in 2013 and instead wait until this year. I will tell you right now, 2016 is when I’ll be going again, just to keep with tradition. (2016 Edit: I failed to keep up tradition 🙁  )

Let me say, the difference from 2008 is stark. It used to be a crumbly little carnival with a few of rough rides and a bunch of food. Now, it has a massive midway with more food than one can fathom. Dreamland Amusements had the midway and seemed to bring a good deal of their equipment, the fair had… 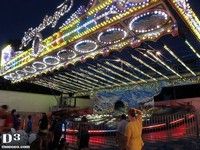 Seriously, what the heck happened? This is a big fair now! It’s almost too big for its own good as the midway was a jigsaw puzzle of rides with some slightly narrow thoroughfares that people tended to bottleneck at.

I parked about 2 blocks away and entered the fair from what I guess is the back. The first rides I stumbled across were Himalaya and Tornado, both Wisdom rides. Himalaya had a sort of open top thing going on with no canvas covering the girders or back end. They may have pre-sloughed it as tonight was the final night. I noticed a few other rides with scenery folded down or non-essential items put away. The lower parts of the cars also had LEDs that cycled through various colors. It was pretty neat! Nearby was Sizzler, yet another Wisdom ride. It’s worth noting that all three Wisdom rides had the same colored LEDs which made the area look like a massive hodgepodge of green, yellow, orange and blue LEDs. 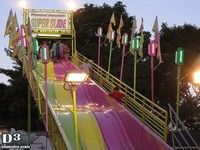 To the right of Himalaya was probably the nicest Super Slide I’ve ever seen. The ride had an awesome pink/green/yellow color and light scheme. The decorative ornaments had been replaced by LED ornaments along with flags placed on both sides. It really was a “super” slide! A strange little ride sat in the middle of the midway called Anchors Away. It’s a Sellner ride apparently. It’s basically two mini swinging ships that seat 8 riders each, the boats simply swing back and forth in opposite directions. This too had LEDs on the supports, only ones with alternating colors.

Zipper sat in the middle of the lot, butted up against the food and game area. Unlike most of the other rides, this looked like it had turbo lighting. This particular Zipper ran on a very long cycle. Sky Hawk, a miniature Vertigo ride with three seat swings, sat nearby. This had lighting on the tower but none on the sweeps and ran on a modest cycle. Scooter was in front of Sky Hawk; not much to say about it! 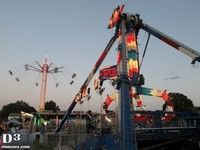 Dream Catcher was on the side of the midway. This is a Technical Park Street Fighter ride and the first time I’ve seen Dreamland’s piece. The ride had a red, white and blue  color scheme with similarly colored turbos. It ran a short cycle to be expected, and seemed to grab a lot of attention from passersby. Alien Invasion was next up, a re-themed Gravitron. They had added some flags to the top of the ride since I last saw it. A simple addition that made the ride look a lot more substantial.

The end of the midway was anchored by a fun house (literally called Fun House), Rock Star, and Big Wheel. Rock Star is essentially an ARM Ali Baba with a rock theme, complete with guitar head scenery covering the counterweight and LEDs made to look like strings. This is certainly one of the nicest stock ride themes out there. As per the theme, they were playing lots of rock and metal music on it. “Sad but True” by Metallica and “Man in the Box” by Alice in Chains were two that stood out. 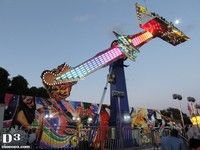 As for food, the fair had an abundance of it, much of it homemade. Pizza, wraps, kebob, pierogi, and much more. I was running a bit tight on time so I didn’t pick up some of their pierogi, but looking back I should have. I should have…

Games were your usual knock over the X, shoot out the star, watergun race, high striker games. Don’t know if this was Paladin Amusements again, but I wouldn’t doubt it. Dreamland had a couple of games within their midway, most notably a ping pong pitch that had goldfish as prizes. This brought back memories of when I was back in high school and some guy that my friend knew won a goldfish at the local fair. He didn’t really want it so he did the only natural thing one would do…he swallowed it. I think this was the same guy that would walk into roads without looking because “cars always stop.” Needless to say, he wasn’t really all there.

Anyway, I did a few rounds before heading back to the car. I wanted to make a quick stop at the Corpus Christi Parish Festival in Chatham to grab some zeppolies, so I headed off for there at around 9:30pm.

Here’s the rest of the photos!

I arrived at around 10:15pm and saw people leaving. Uh-oh, that’s not good! I decided to walk to the lot to see what I could see and sure enough they were tearing down. I thought they were open until 11pm, but 10pm was the closing time. I run a website that lists carnival dates along with hours, by the way. In my less than 30 second visit, I saw a Sizzler and Rock-o-Plane (with LEDs!!) but not much else.

Zeppole consumption would have to wait.