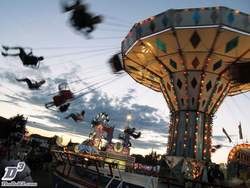 The Feast of St. Anthony Festival is an annual fair held at Our Lady of Czestochowa parish in South Plainfield, NJ. The event lasted five days this year spanning from Tuesday, June 5th to Saturday the 9th. I headed over on Thursday, leaving at about 7:45pm so that I could get some dusk as well as night photos. Despite being a fairly short drive (about 20 minutes) I had to use GPS as it’s almost all side roads to get there. As it ended up, I had to disobey its directions a few times anyway since it tried to send me in dumb ways to get to the place. I arrived just after 8pm and was pleasantly surprised at the setup this year. The fair had… 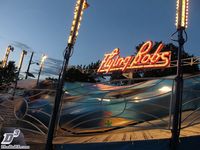 Dreamland Amusements was doing the spot this year and put together a much more cohesive looking midway compared to the past years I’ve visited the festival (2008 and 2010.) Along with the list of operating rides were a few racked rides hanging out behind the scenes, namely a Hrubetz Hurricane, Tilt-a-Whirl and at least one kiddie ride; I’m actually not even sure if Hurricane could work at all on the festival grounds without taking up a load of space that could be used for other rides.

The first ride I saw was an open topped Herschell Flying Bobs. The ride had a blue and white (mostly blue) color scheme with some decorative lighting around the ride and the Flying Bobs sign mounted in the center. It may not be the nicest open top Flying Bobs ride I’ve seen (pic) but it was run the way a Bobs should be, at a brisk speed with loud music and a great mic-man. Even the second ride op seemed to be into it, grooving out to the music and all. One thing about Flying Bobs is that the cars always rock like crazy, and this one was no exception. 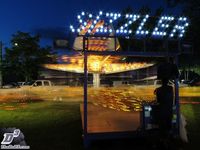 Right next door was Zipper, the end all carnival ride. This one had newer model cars with the side panels (as opposed to all mesh sided cars.) Not a bad looking ride, it had turbo lighting instead of the newer LEDs or older florescent tubes (I haven’t seen the latter in a LONG time.) Next up on the midway was American Flyer, an old Miler kiddie coaster. I remember Keansburg Amusement Park used to have one back in the day. A Wisdom manufactured Sizzler sat next to the coaster. This one looked really nice with gold and purple lights on the sweeps and orange and gold lights on the cars. Definitely one of the nicer Sizzlers I’ve seen and it spun pretty fast as well! 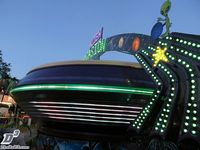 Across the midway was Alien Invasion, basically a Starship 2000 re-theme. I sort of got tripped up thinking this was a newer Alien Abduction model by Wisdom considering the similar names but it’s definitely not. The ride had LED lighting on the ship that changed color every so often along with green LEDs on the flash. I like how the little alien on the flash seems to be bouncing Neptune like a basketball. Next up was a Wisdom Tornado that had blue and yellow lighting. Not bad looking, nicer than the stock yellow and orange. Looks like I missed a picture of it though, hmph. 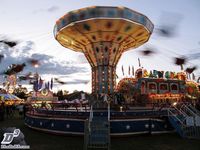 In the middle of the Midway was Super Swing, a medium sized swing ride set on a platform. I have no idea who makes this but it might actually be the same ride that used to come around at the Our Lady of Peace fair back in the early-mid 90s, only now it has some flash panels (it used to just be the bare orange frame.) Man, I used to love riding that thing when I was little! They put the swings in a nice location at this fair, allowing riders to sail over the busy center portion of the midway. Across from the swings was a Mardi Gras funhouse, a nicely flashed one at that. 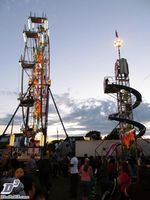 A line of kiddie rides extended down to the midway ending with an Eli Bridge Eagle 16 wheel and a spiral slide called Landslide. The wheel had white spokes with blue supports with rainbow colored lights in the spokes and white/blue florescent tubes on the arms holding the cars. Very nice looking ride and pretty big as well. Landslide was an interesting slide, more like an old Helter Skelter type ride than one of the Fun Slide type slides.

The fair featured some games; wheels, shoot out the star, knock over the X, typical carnival stuff. There was also a smörgåsbord of food to choose from ranging from pizza and hamburger to pirogi and kebob. Also noted was a beer area with cheap beer on tap along with a chance wheel that awarded betted money to the winner. I debated on getting either a kebab or pirogies and decided on getting the pork kebab for $4.00. I left the fair at around 9:15pm. All in all a nice festival, much better than previous years!