Check out the Fright Fest 2017 video!

Well it’s been a little over a month since the season ended, but I finally got this video done! 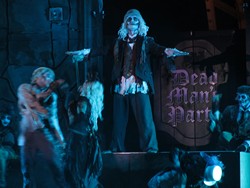 Fright Fest itself was OK; they added in a new terror trail along with a haunted (family) hayride but still charged $7 to traverse each terror trail. On the other hand the shows were all pretty good especially their main show Dead Man’s Party. I actually saw more shows than usual because the park was pretty crowded every time I visited…although it was strange because only the bigger coasters that had huge lines while lesser coasters and flatrides had practically none. Also lines seemed to stay long right up until closing which is something I hadn’t seen in years past, not on Friday nights at least.

Here’s some photos taken during Fright Fest, I really didn’t take too many as it was usually too dark to get a good picture!

It’s worth noting that my final trip to the park occurred on the eve of the now infamous October 29th nor’easter which I basically drove in the next day to get back home…that really sucked. Our area in north Jersey was out of power for nearly a week with some surrounding towns out of power for a week and a half! I’ve never seen so much damage from what amounted to a routine snowstorm ever and it was all because it happened while the leaves were still on the trees.