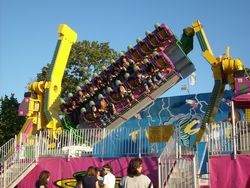 The Maverick moniker is applied to a bunch a things, I’ve noticed; movies, cowboys, presidential and vice presidential hopefuls, a roller coaster at Cedar Point and also a flatride! The flatride Maverick is a little spin n’ puke ride made by Moser Rides.

Maverick consists of two arms attached to two supports on each side. Slung between the arms is a gondola, not unlike that of a Top Spin. The opposite ends of the arms sport a counterweight. One might say that the ride is a mini Top Spin; however, Maverick has a little trick up its hypothetical sleeve. First off, one of the arms is hinged so that they both can move in different directions and not tear the gondola off of the arms in doing so. The bearings on the sides of the gondola that attach to the arms can also swivel allowing the gondola to flip easily at all angles.

The name has almost nothing to do with the ride, much like a number of other rides (Touchdown, Hustler, etc.) 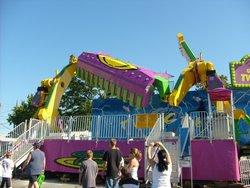 After stumbling over the poorly placed support bars that hold the front of the gondola in place, you grab a seat. The safety measures on Maverick consist of a shoulder harness and seatbelt; the jewel squashing lapbar, a loathsome trait of the Top Spin, is not needed on this ride. Allthough a lot of people have trouble getting the seatbelt on I noticed, and it is indeed a little tough considering how bulky the harness is and the position you’re in.

The ride experience can vary greatly from one ride to another. The one that I went on ran on a few different pre-programmed cycles. Every cycle preformed the same movements, just in a different order. The ride movement can mimic a Top Spin where the gondola flips while the arms move forwards or backwards or the arms can move opposite one another and flip the gondola while holding it diagonal.

The flips feel very different from a Top Spin’s flips however. On a Top Spin, the gondola is hung a bit lower resulting in some pretty nice positive Gs while flipping. Maverick’s gondola is attached to the arms more towards the center of gravity which seems to make it roll rather than flip. The result is a flipping that isn’t nearly as powerful as the Huss counterpart.

Maverick comes in a couple of flavors, a 21 seat small version, and a larger 31 seat version.

Maverick is one of many rides of this type. Rides that have a similar motion to Maverick are:

I believe that Maverick itself is not the first version of this type of ride, rather the Super Loop on Top is; the two rides are very similar, Maverick being like a scaled down version of it. I’ve been on a Super Loop on Top once when Morey’s Piers had one named The Storm. The ride experience is a little more intense due to the gondola being hung lower (similar to Top Spin) than on Maverick.There are also a few non-inverting versions of this particular ride such as: