The Hustler and Tempest, both made by Watkins, are two similar rides with virtually the same components; they both have a large boom that is connected to two smaller booms on either end. Attached to the ends of the smaller booms are large spinning pods that can hold about 8 people. The only real difference is that the Hustler is on a flat plane while the Tempest is titled on a slight angle.

Both of these rides are basically stylized Teacup rides. However the pods are much larger than a normal teacup car and the pods on these rides are very tough to stop spinning; actually, you can’t stop them since there is no wheel in the center of the pod that you can turn. 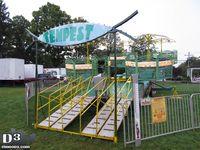 As far as looks, many non-rehabbed ones look straight from the 70s. Vivid reds, yellows, greens, and other harsh color combinations were the norm before pastels  become popular. Hustler in particular has a large Menorah looking sign in the center that rotates with the ride. The sign has 7 circular panels that are surrounded by big old light bulbs with one letter of the word ‘HUSTLER’ painted on each panel.

For decor, Tempest has strange umbrella ornaments above the pods. Some are beefier looking than others but I don’t think any actually provide shade or cover from rain. 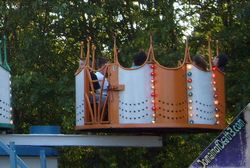 I’ll describe the Hustler because that is the one that I have actually been on.

First the ride op opens the door, and a certain number of people pile into the pod. I don’t remember the ride having seatbelts or any sort of safety restraint. It really doesn’t need them; I mean, how often do you see Teacup rides with safety belts?. Hustler does have two circular shaped bars in the center though, one to hold onto, and one to put your feet up against.

If you pool all the people on one side, then the car spins like hell. That’s fun! If everyone is spread out then the car sort of balances itself and doesn’t spin as much. Booooring!

There is a ride called Storm that is a new age Tempest made by Wisdom. The Storm has a large platform, so everyone can load at the same time. The cars on the Storm are rectangular shaped with 4 seats on each side; there’s also harnesses to keep riders in which is a no-no on rides that don’t go upsidedown! A lapbar similar to what Wisdom Tornado rides have would be adequate I think. Unlike the Hustler and Tempest, Storm has cars that spin mechanically. There is yet another new age Tempest called ‘XScream’…a very original name. This one looks a lot like the Storm, only there is no platform and the entire ride rises into the air, tilts, and does a wave type motion. It sounds cooler than it is.

Hustler at the 2008 Holy Family Carnival in Hazlet, NJ.