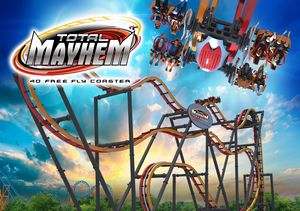 This morning Six Flags unveiled their 2016 park additions and Six Flags Great Adventure will be getting an S&S 4D Free Spin named “Total Mayhem.” It will be placed in the Lakefront area, about where the Aqua Stadium was if renderings are accurate. Total Mayhem will stand at 12 stories tall and feature free spinning seats that turn riders upsidedown six times.

The Lakefront will be somewhat redeveloped along with this addition as both Grandstand by the Lake and Aqua Stadium are being torn down; something many park-goers in recent weeks pretty much know about already as demolition is currently ongoing. According to the owner of Great Adventure History, the Grandstand area will be landscaped into a tiered hill; maybe like a lawn theater for fireworks shows around July 4th (or maybe more, who knows.)

Other additions at Six Flags parks include The Joker, an RMC revamp of Roar at Discovery Kingdom; a rehab to Revolution at Six Flags Magic Mountain; a pair of Justice League: Battle for Metropolis dark rides for Six Flags Great America and Six Flags Mexico; and some Larson Super Loops for The Great Escape, Six Flags St. Louis, and Six Flags Fiesta Texas (Texas’ one will be called Greezed Lightnin’ while the other two will be named Fireball, just like the fair versions!) The entire lot of additions can be found at the official site.

Also, Great Adventure kicked off a 2016 season pass sale that’ll run for five days until Labor Day, September 7th. $69.99 for one season pass, $64.99 when multiple are bought. The passes can be upgraded to Gold Passes if redeemed before November 1st. So…a Gold Pass for literally less than a single day admission at the gate.

And here’s a video of Batman: The Ride at Six Flags Fiesta Texas, which Total Mayhem will be a clone of: