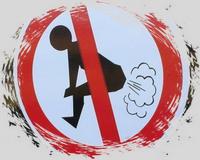 Yeah, don’t fart in line especially if you’re in The Netherlands. There’s a wonderful news report out today from HLN Bizar (site in Dutch) that a fight broke out in line for the Flying Dutchman coaster at Efteling, Holland’s largest theme park. Apparently some dude in line passed gas (or perhaps laid out a “fart trap,” a strategically placed fart) which prompted a 16 year old kid to loudly comment on the stench (” God, dat stinkt!”) Apparently that’s all it took to offend the 30 something perpetrator and his buddy who proceeded to lay the smackdown on the kid. Hoe verschrikkelijk! From what I gather, police quickly broke up the scuffle and the guys were fined for brawling.

So what did we learn from this lesson? I want to say it’s to not fart in a theme park queue line, but the fact of the matter is that the kid who noticed the fart was the one who got pummeled! Maybe the real lesson is to not even acknowledge said fart, after all the first smeller is usually the dealer (whoever smelt it dealt it!)

Thanks to Google Translate*, I have culled some reactions from various Dutch and Belgian commenters on the article** ; let’s see what they think:

Can that person who had abdominal pain, but many people are just fat pigs and have deliberately farts or farmers.

Why all the rush to a stupid fart, you know there are many, and should always laughing, and yes, even good girls can be … greetings, and the winds from behind …

The motorcycle as I do not want my intestines, should you not take your nose! let them fly hahahaha

The “white” was born fart in a bottle and let the priest out scent. LOL BWAAAAAHHHHHHH

* A notoriously inaccurate translation service.
** Yes these are real comments.