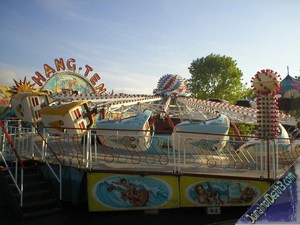 Hang Ten is a wild spinning ride manufactured by SDC. Hang Ten is very similar to the more well known ride ‘Explorer,’ manufactured by Reverchon. Hang Ten is basically a wheel with 20 suspended cars; each car is fitted with a small flip down lapbar to secure riders. The wheel is attached to a center hub that functions as the drive to spin the wheel as well as a lift mechanism. The hub can also rotate in the opposite direction of the wheel, making the cars travel in an up and down wave type motion.

First the ride op will usually tell you to go to a certain car. This is so the wheel will be balanced if the ride doesn’t have a full load. Next you need to cram yourself into a car because they are pretty darned small. I’m only 5’8 and I think it’s cramped; a 6 foot person would be in like a ball position. The lap bar is in a horrible position as well; it’s hinged on both sides but in a diagonal position until closed. The person on the inside, where the bar is hinged a bit lower, has to somehow squeeze their legs under the bar to get it closed.

The ride starts with a lengthy spin up. The ride spins fast enough to push you down into the seat during the ride and honestly feels about as fast as a Huss Enterprise. Once up to speed, the center drive starts to spin in the opposite direction and then rises the wheel to a slight angle so that it’s making wave type motions. If the wheel is rotating fast enough, the cars will be thrown completely sideways at the apex of the swings.

As with the Cobra, one of my good friends and I have an inside joke about the Hang Ten; particularly one of its former ride operators.

Hang Ten would show up at the local fair every year with Cookes Amusements back in the late 90s/early 2000s. A lot of ride operators were also the same, and one of them we dubbed “Shifty Shellshock” after the blonde tattooed guy from that awful rap/rock band Crazy Town. He got this name simply because we would always hear the ride playing Crazy Town while he was manning the controls at the local fair. So, on the last day of the town fair one year, my friend and I went on the Hang Ten. Shifty was taking down some of the small backdrops that surrounded the ride in preparation for the tear down after the fair closed.

As we spun around, we decided to yell ‘Shifty’ every time we came around and saw him. After a bit of this, one of us commented that a pissed off ‘Shifty’ would probably be waiting for us at the exit ready to beat us with a wrench. And what do you know, as the ride was slowing down we saw ‘Shifty’ walking towards the exit gate with a large monkey wrench in his back pocket! Oh…the nostalgia.

Here’s a video of Hang Ten at the State Fair Meadowlands back in 2009.