For one summer I worked at a small amusement park (I won’t say the name to keep me safe, heh) in New Jersey. The location of this park was in an area with many fairly upscale towns nearby and it was always attended by young married couples with little kids that lived in the general area. 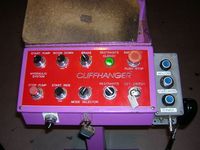 A typical ride control panel has many buttons; three of which are all the ride op really needs to know.

I’ve always wanted to work as a ride operator and when I got the job I was like “all right I get to work on rides!” During weekdays it was usually never that crowded, unfortunately this was sort of boring because time just crawled by. Every now and then some kids would want to ride and I did my thing, simple. I didn’t mind running the rides, the only reason I didn’t like the park was because of the people that went to it!

The first bit of annoyance I encountered were people asking about the ticket prices when they were blatantly posted in front of the ride. It’s alright though because I know they were doing it because every single ride was 4 tickets and they just couldn’t believe their eyes; the Scrambler was 4 tickets and so were the kiddie boats. There was also a nice rule that regardless of the ride, the parents had to cough up 4 tickets to ride with their kid. This rule would cause an up-roar with the parents when a kid wanted to go on a ride that he/she was too short to ride alone. Of course the ticket booth does not have this rule readily posted so it was up to the lowly ride ops to break the news to the parents. “I have to pay 4 tickets? But I’m not even going to have fun on this I just need to accompany my kid! I don’t understand this at all!” I got this line almost every time. Once, and only once, have I heard this:

Woman: “You don’t have to pay 4 tickets do you?”
Guy boarding ride with son: “Well I am getting on the ride aren’t I?!”

Of course, some parents wouldn’t even get to the “4 ticket rule” before they argue that their kid is responsible enough to ride even though they are under the height restriction. People would practically bargain with me to let their kid, who was under the height limit, on the Scrambler. Now, the restriction is there for a reason, it’s so you’re kid doesn’t fly off the damn ride! The amusement park didn’t have an L shaped bar to see if you’re tall enough, instead it was a piece of tape on the entrance gate. Kids would try to stand on their toes, lift their head, anything to make it seem that their over the limit. I personally think that the height limit on the Scrambler is too low to ride alone; it really needs to be high enough so that kids don’t slouch down in the seat at all. People that argued that their kid should be able to go on even though their kid is an inch under the limit don’t know what their talking about because it’s so easy for one of those kids to fall over in the seat and then slide under the bar. And if an accident should occur, guess who everyone will blame first? The ride op!

I remember one time I was running the ride with a kid who just made it over the height limit. Once I got the ride to full speed, I saw the kid repeatedly lean to one side and then let the G forces pull him into the side of the car. Every time he hit the side he would be in a laying position; a quick thrust forward could have sent him under the bar. Once I saw this, I slowed the ride down and yelled to him “hey you sit up!” He did for a bit, once it got to full speed again, he started to pull the same shit. Again I slow it down and told him to sit up. The third time this happened I slowed the ride down a bit and yelled a stern and decidedly pissed off “HEY STOP MESSING AROUND AND SIT UP!” This finally set him straight for the remainder of the ride. I was surprised that the parents didn’t make a comment to me for yelling at their kid. After that incident I was a little weary about running the Scrambler with kids just about or at the height limit again. 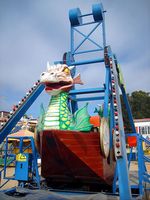 Kiddie rides are boring as hell to operate

A lot of the kids that went to the park also would break rules that I thought everyone knew. One time while I was running the bumper cars, these three kids unlocked and opened the entrance gate, and ran up to me to give me their tickets. I mean, the ride is running, don’t they know enough to not open the entrance gate themselves let alone to not walk into the ride area while it’s running?

A few times on different rides, kids would take off their seatbelt while the ride is running. Man that is stupid! One of the worst things I saw was when a kid pushed the speed adjusting lever on the Scrambler while his mother was holding his hand! She saw it and didn’t even reprimand him or anything! You know, if that ride didn’t work in conjunction with a foot pedal, then that kid would have turned the ride on and weedwacked everyone in the ride area! Another time I was letting people on a small drop tower ride, and this 10 year old or so kid just slaps the e-stop on the control panel while walking past it! I had to go and reset the ride because of that, which didn’t take long at all but if I didn’t know how to it would have held everyone up. I really should have kicked that fuckin’ kid off the ride and I look back ashamed that I didn’t.

No matter how bad the kids were though, the parents always could top them. A lot of the time a parent would assume that they could stand inside the ride area while their kid rode and then, when I asked them to wait outside, would question this rule while kids waiting for the ride to start would get restless and start taking their seatbelts off and shit which delayed the ride even more! On a busy day, running bigger rides became hell because it was just you with no other ride op. Factor in all the people that questioned the height restriction, and the 4 ticket rule, and it could easily take 10 minutes to load a ride.

The worst parent ever was this one guy who thought I didn’t secure his kid in. It was on a ride called the Crazy Submarine. The bars on the ride only snap down to one position; they don’t ratchet down to the persons lap. There is also a door to keep kids from exiting in mid-air. So I fill the ride up, check the bars and doors and start up. Then some big, white ‘gangsta wannabe’ dude says “Hey you didn’t pull the bar down for my kid!” I was a bit shocked at this statement so I looked as the car came by. Nope, sure enough, it was in the down positon; the bars only lock into one position so it’s not uncommon for them to be a distance from the rider’s body.

So after seeing this I said, “No, I checked it before, it’s locked.” Then the guy goes “Bullshit! I didn’t see you check it, it isn’t I can see it above the door, it’s not down!” Again we come back to the fact that the bar only goes down to one position. I was in no position to explain to this guy that the bar was in the correct position so again I say “I checked it before, it’s locked and I can see that it’s locked.” The guy said the same thing over again and then said “If my daughter gets hurt I swear I’ll beat the living shit out of you!” Uh oh…

Now, I should have said, “and if you lay a finger on me I’ll fucking sue you for all you’ve got, which probably isn’t much!” However, that would have resulted in a vicious beatdown (this guy was pretty big) and as an added bonus, my foot would have come off the ‘dead mans switch’ causing the ride to stop, standing riders in midair…it would have been quite the scene. Instead I asked if he wanted me to stop the ride to show him that it’s down and unfortunately he did.

As I brought the ride to a halt, one parent on the ride started yelling at the guy saying “You idiot it’s down! Why are you threatening to beat him up when he did everything right? You just made him stop the ride for nothing!” The guy was like “oh shutup woman,” like a total dick. I showed him that it was down and he didn’t even apologize! What a sack of shit! After that I decided that I would finish up that summer and then never work at a small amusement park again.

Now I might sound like an asshole after this whole rant but then again 75% of all the ride ops at the park that I talked to felt the same way! Now, I wouldn’t mind working at a park with bigger rides; rides that I can run the way I want to run them; you know rides that can be run manually like the Breakdance or Top Spin. But a small family park, no way, never again! Well…maybe for $25 bucks an hour. lol