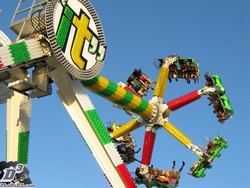 'It' at Morey's Pier

2011 was a pretty good season for fair and park-going here at The DoD3. While I posted a bunch of trip reports from fairs and theme parks, there were some that didn’t get mentioned because either they weren’t all that notable or I simply didn’t get around to posting them. That’s awful isn’t it? It’s like I’m withholding information or something (because, you know, carnivals are ‘srs bsns‘ here.) Well here’s those trip reports in a nice, condensed, short attention span form.

I honestly have no idea who puts this carnival on (Middlesex High School maybe?) but I stopped by for maybe fifteen minutes on April 27th. The only reason I remember the date was because it was the same day as the 2011 Super Outbreak and being a weather weenie (along with coaster/carnival dork, attractive combo right there) tracking the once in a lifetime tornado outbreak pretty much trumped the fair. Anyway the fair was being run by Campy’s Midway and had Scat, Gravitron, Big Eli wheel, Bumper Cars, Octopus (maybe?), a bunch of kiddie rides and a lot of food. I did a walk of the fair, grabbed a delicious kabob from the Chinese BBQ stand and hightailed it back home to pour over radar and live streams.

This fair took place a hop, skip and jump away in Chatam, NJ in the cramped parking lot of the Corpus Christi church. My visit to this fair is always less of a carnival excursion and more of a trip to pick up zeppolies, snap a few pictures and leave…this year was no different. The main attraction of the fair was a Trabant with a casino theme; it looked like the old ‘Wave’ Trabant ride owned by Tommy’s Midway only with a new theme/paint/lights. Other rides included a Sizzler (being worked on that night), some swings and a Ferris Wheel along with a handful of kiddie rides. 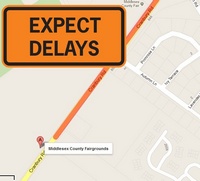 This really isn’t even a trip report. Basically I drove down to where the fair was, got caught in a massive traffic jam on the road leading to the fairgrounds and ended up turning around after moving 1/8th of a mile in 45 minutes. I have the feeling I didn’t miss a whole lot anyway.

Took a day trip down to Wildwood late in the summer to hit some of the rides. I must have hit a bad day as Great Nor’Easter and Great White were both closed that day (Great White was actually being re-tracked that day, a photo is in the gallery below.) I also almost got on Condor but was turned away as an approaching storm closed the ride; little did I know that was  the last chance to get on Condor ever! Here’s some photos from the day:

I saw a pamphlet for this at a local shop so I decided to check it out as it was close by in Union, NJ. I walked in, walked over to the rides section and found it to be a bunch of rag-tag looking inflatables and a “train” ride (no tracks, just a drive around the parking lot.) Another miss for the The DoD3! Instead I bought a bottle of some Greek beer called Mythos (not all that great by the way) and milled around looking at the vendors for a little bit. Good place to eat and drink your ass off but not much for the carnival fan. 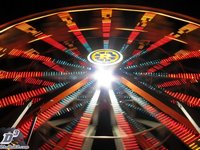 This fair was just a bit over the PA border with Reithoffer running the show, how could I not check it out? The fair was postponed quite a bit due to flooding before finally opening, I should have took that as a warning. The fairground was an absolute mud pit to the point where I don’t even know how some rides even stood up without sinking. Some places were so bad that it felt like walking though a swamp and was slippery as hell to boot. The fair was also amazingly dead the night I went with probably more carnival workers than patrons. The result was every single freaking game worker attempting to get me to play their game. You know it’s bad when they’ll beg a lone guy with a camera to play a game with stuffed toys as the prize!

Attractions included: Speed (KMG), Zipper, Super Himalaya, Giant Wheel, Vertigo, Starship 2000, Fireball (Larson) among others. I think Reithoffer’s Stinger was originally supposed to be at the fair as well but didn’t show up, probably because of the lot conditions. I’ll probably go again this year if they have it, they really just got a bad break in 2011.