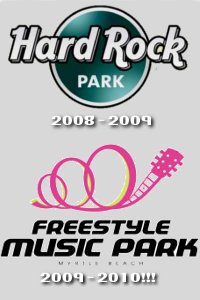 Back, way back in 2008 there was a brand new theme park called Hard Rock Park. It had attractions like the B&M designed Led Zeppelin: The Ride, uh…some other roller coaster, and some magic mushroom themed Huss Airboat. Hard Rock Park officials aimed to have millions of visitors the first season; they got like 39 or so. With that, Hard Rock Park closed for the season, and never reopened.

Luckily the park was purchased in 2009, saving the rides from being auctioned, sold, or scrapped. Freestyle Music Park opened in 2009 and had  basically the same attractions as Hard Rock Park only with different names. For example Led Zeppelin: The Ride was renamed Generic B&M Looper…err, I mean The Time Machine (nice logo though!) The park had new life breathed into it, ready to entertain guests for generations to come.

Well guess what…Freestyle Music Park will not reopen in 2010.

According to The Sun News, Freestyle Music Park had inherited a nice fat $570,000 debt left by the previous owners (aka the flop that was Hard Rock Park) and had until…well, two days ago to pay it back. Needless to say the moneys were not paid back by the deadline. There was no comment by FPI MB Entertainment, the owner of the park, due to a non-disclosure agreement with investors.

So…heh, that was quick; I expected Freestyle Music Park to last at least two years! Also I think whoever looks into purchasing the park next should get some researchers in there to make sure that the whole place wasn’t erected over some Indian burial ground. However, there is a silver lining; if the park ever opens again as another entity, coaster point whores will get THREE, count that 3, points for one coaster! How sweet is that?!

Anyway, I hope the news gets to all the families looking to visit the park or else we’ll see this type of scene play out quite a lot in 2010! Possibly with the moose replaced by Ace Frehley, and the “two weeks” changed to ‘indefinitely.’