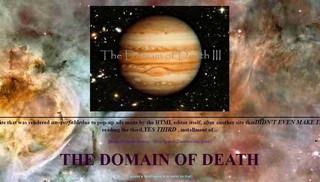 It’s been especially quiet around here and a lot of it is because for the past few weeks I’ve been revamping the website in preparation for a domain change. I’ve been calling the site “The DoD3” for a while now and I decided to finally pull the trigger on changing the URL to thedod3.com. In spirit it’ll always be Domain of Death 3, but I’m sure the URL was off putting to some. I thought about changing it to something more descriptive than “The DoD3”, but why even? I’m way past the point of wanting to turn this motley little site into a stately hub of amusement/carnival articles.

The DoD started as a personal site that happened to have a lot of amusement park related stuff and turned into me trying to shoehorn it into the online amusement universe. It’s been slowly nudging back into the former and that’s kind of the way that I want it to go from here. Obviously I’ll still be talking a lot about coasters and carnivals but I’ll also put up an “off topic” post now and again.

Below is a gallery of this site through the years; version 1.0 to 1.3. Things sure look different than back in 2005! I’ve even added some new awesome features that I’m sure you all will like!

And yes, I know the date. This isn’t an April Fools Day joke!

Edit: Dance party is over 🙁 I quite like the design though, so I guess that’ll stay!