While searching for fairs on Google, I stumbled upon the Warren Lions Expo; a five day fundraising event held by the Lions Club of Warren, NJ. On the first day of the fair, I headed over there with one of my good friends and his significant other. I had no idea how this fair would be and didn’t rule out that it could simply be a bunch of kiddie rides and food stands. Although, part of the reason we went there was to grab some fair food, so the latter wouldn’t have been all that bad.

The fair was only about fifteen minutes away and it was storming as we headed to there; luckily the storm ended just as we got there. The parking for this fair was very nice as there were many open parking lots around used by local businesses. They actually had an entrance fee for this fair of $2.00. The fair had quite a few decent rides brought by McDaniel Brothers Shows, the company that used to bring the rides for the fair in my town. The lineup was… 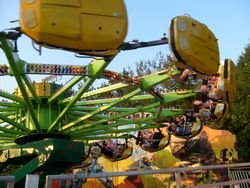 The website for this gala made it seem a bit better than it really was, but I can’t exactly complain as it wasn’t terrible or anything. The big ride at this fair was the ARM made Quasar, a fairly rare ride. It was the first time I had ever seen one of these rides, and it probably won’t be the last if I happen to stumble across another midway headed by McDaniel Brothers. It ran pretty fast, swung fairly high , and had a decent length cycle. I wanted to go on it but they had a no single rider’s policy and it cost some $6.25 to ride (5 tickets at $1.25 each.) Now I would have paid that to go on it, just because I’ve never been on one and it did actually look like fun, but my friend balked due to the price.

Now, I know that carnivals bring in rides from different companies sometimes, but I didn’t know small carnivals did it as well. That’s the case with the Hustler. A week before this fair I saw the Hustler down at a fair in Hazlet, NJ…with the same ride operator no less! At the previous I fair noticed that the Hustler read “McDaniel Brothers Shows” on the side but thought maybe Ace Amusements, the ride operator at that carnival, bought it off them. I guess that’s not the case! The Hustler, a ride that I haden’t seen for years before this June, looked fairly good but ran at a slowish speed. It didn’t look like it had enough speed to really spin the cars if the weight was distributed correctly. But in any event it’s always nice to see a rare ride like this.

This fair also had a very nice looking Octopus ride which had a speaker blasting metal music on it. You don’t normally have music on an Octopus ride; typically platform bound rides have music (Orbiter, Top Scan, etc.) The other weird thing was that it was metal music being played…on an Octopus? The other rides were all pretty standard; the Scrambler was a Big Eli and the Ferris Wheel may have been as well. The Tilt-a-Whirl and Gravitron had custom painted elements, but were in need of a touch up it seemed. A little side note was that the power generator unit had the words “children are people too” painted near the bottom of the truck. My friend made a joke that maybe the workers had to be reminded that.

At the fair, we basically just walked around a bit and then got a bite to eat. I got this shish-kabob that wasn’t too bad and then had a slice of pizza and some lemonade. While we ate we noticed a person walking around dressed up as a Re-Max balloon. We watched as the person was attacked by jerk teens that jumped and slapped the costume. Eventually the person in the costume began to simply push the kids out of his way; that’s right, kick their ass Re-Max balloon! I was hoping for some more non-food vendors at this fair, but there were only three or so.