Due to the fairs proximity, I stopped by three out of the four days it spanned. For the third or fourth year now, Blue Sky Amusements have provided the rides, bringing nearly all of their rides to the event. The fair featured… 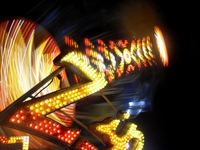 Considering how the lines were, the Zipper seemed to be the big hit at this fair with some dual loading action going on at the busiest times. Just to the left of Zipper was the Chair Jet Swinger, a no-frills swing ride that actually went pretty fast. At first I thought it was a Watkins Swinger model but it’s actually a custom swing ride built by Ron Cooke of Cookes Amusements (the operator that previously did this fair.)

To the right of the Zipper was a Scooter ride which was pretty standard as far as Scooter rides go. This particular one did have a recording that said “turn the wheel to go backwards” or something to that effect. While at the fair one night, some kids were tossing a stuffed football prize around when it landed over by me. I picked it up to throw it back but unfortunately the football flew off course and landed atop the Scooters. Oh well!

To the right of that was a Wisdom Himilaya decked out with lots of lighting, strobes, sirens, and music. It also went forwards and backwards. It didn’t have the ‘wow’ factor of a full fledged Musik Express or Super Himalaya, but it also doesn’t rack on multiple trailers unlike those two! It’s probably a better fit for this carnival than a larger one anyway with all the families and kids around. 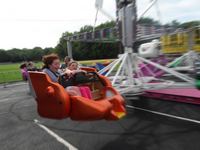 Next to the Himalaya was a Sizzler; almost a requirement at fairs today if they don’t have the real deal (ie. Big Eli Scrambler.) This Sizzler, unlike the one I saw at the St. James Carnival, went pretty darn fast. Actually I think the three outer hubs spun faster than the center hub! The rides color scheme consisted of white with pink, blue, orange and green cars along with banks of red, white and blue turbo lights running along the sweeps and center ornament. The cars also had bluish-white lights on the back…very nice.

Round Up was the next ride up on the midway. It was a Hrubetz model with an interesting yellow, green and white color scheme. It doesn’t sound all that good on paper, but it didn’t look bad. The ride also had LED lights around the platform and sign that alternated colors every so often as well as some old style florescent tube lightning. To the right of this was another centrifuge ride, Gravitron, which had the standard yellow, red, orange, green, blue lighting. It also had ALF on the flash! 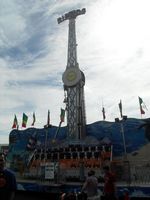 The last thrill ride was Riptide, a re-themed ARM Ali Baba. The particular ride has undergone some major lightning upgrades and features sequenced LED lights on the boom as well as red LEDs on the gondola. It’s got to be the most tricked out Ali Baba I’ve ever seen.

The fair also had a medium sized ferris wheel on the far side of the midway. It was pretty nice looking with the green and multicolored cars color scheme and sequenced lighting package. The wheel sort of reminds me of a Big Eli style wheel with gondola cars; it’s not as robust looking as something like the Chance Century Wheel which is comparable in size.

Along with the rides was an alley of games located near the school. Games consisted of chance wheels (one of which my friend was working), frog bog, shoot out the star and other typical carny games. One game actually had inflatable, red, white and blue machine guns as prizes…that was interesting! Inside the school’s gymnasium was a small restaurant and the ‘new’ gifts table featuring unwanted and unused Christmas gifts donated by parishioners (hence, new gifts table!) There were also various vendors that sold sports items, stuffed toys and the like.

Finally, here’s a video of Riptide for your viewing pleasure!