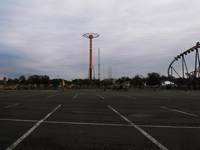 Fall Family Fun Night is one of two season pass holder exclusive events held by Six Flags Great Adventure; the other being Coasters After Dark in spring. The obvious perk about these events is that the park crowds are dramatically reduced allowing coaster nerds like myself to ride over and over and over. This does backfire occasionally as past events have been canceled midway through due to not enough damn people showing up, typically happening if the weather turns for the worst.

This year the forecast was looking dismal but cleared up prior the the park opening. I arrived at about 6pm (the park opened at 5pm,) checkout out pieces of Green Lantern sitting in the parking lot and took in the sight of Great American Scream Machine NOT being there before speed walking to the entrance. Before anything, I walked down to where Scream Machine entrance was to see what they had done. The Scream Machine arch is still there along with the queue house, but everything else is gone. I thought about riding Superman as the line was abnormally short, but I wasn’t wearing pants with cargo pockets and feared that my wallet, camera and phone would come dribbling out while in that flying position. 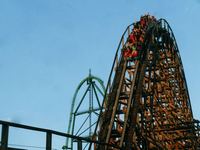 I decided to walk over to El Toro, bypassing Kingda Ka for no particular reason. On the way I was treated to some dude with long hair arguing with a woman with two security guards/trash picker uppers standing around watching. The guy said something like “you always have to open your big mouth and ruin everything” before storming off. The women then turned to a guard and said “that’s my brother…he’s really into rides.” She continued to talk with the guard while the guy stopped, turned (with me basically standing between the others and himself) and yelled “you make me sick!” before storming off to El Toro. I tried not to die laughing at this flagrant display of coaster nerd rage.

El Toro had a one train wait and I waited maybe two minutes total. While waiting I noticed the raging coaster dude waiting for the back seat while excitedly spewing out El Toro facts to others waiting near him; he sure cheered up quickly. El Toro was fun as always with lots of air and a ridiculous amount of speed that doesn’t let up throughout the entire ride.

Next I headed to Bizarro to ride the only seven looping coaster in the park now that Scream Machine is gone. The area around the ride was practically a ghost town but they still made people enter the far end of the queue line instead of opening the queue further up like they normally do on low crowd days. The wait for Bizarro was literally nothing for most rows, however I noticed the front row had only three people waiting so I jumped in line for the front. It certainly is a different experience in the front with just track and nothing else around you. Bizarro also had the multicolored LEDs working on the shields at the bottom of the drop…a first it seems! 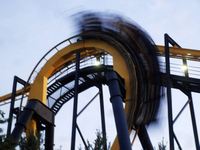 Afterwards I took the long walk to Skull Mountain, literally crossing the park and skipping Runaway Mine Train in the process, again for no particular reason. Skull Mountain had a nothing wait but my favorite seats had a line (those being the back ones of course.) Instead I rode in the second to last car. Skullie seemed to be going faster that night, possibly because the front cars were all filled with a big space in the middle. It was completely dark inside the ride save for a pumpkin prop that was awkwardly lit up with nothing around it. The ride also has strobes that flash while on the brake run for reasons unknown (maybe the drop is a better place for those?)

After Skullie I headed to Batman: The Ride expecting a total walk on. I was pretty much right, although the front row had a two or three train wait so I chose the second row which had absolutely no one waiting. As time goes on it seems that Batman is getting more and more forceful for some reason; the g-force while going the the loops and helix are really intense! After boarding I headed towards Dark Knight only to see the pre-show doors close. I didn’t want to wait so I just went to Nitro. 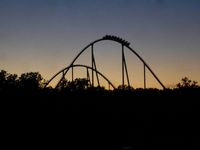 Nitro had a station wait and the last row had a couple of people waiting so I headed for the back. The two people in front of me boarded and of course took the two end seats, so I waited another train for my own end seat. When the next train came back, two kids stayed in the row while I boarded the end seat nearest to the air gates. Nitro wasn’t bad at all and had a lot of airtime going over the camel backs and especially in the bunny hops near the end.

I ran over to Dark Knight afterwards and got in the pre-show area prior to the doors closing. Despite the fact that basically everyone who was there that night has seen the pre-show (you know, being season pass night and all) we still had to endure the movie of Harvey Dent giving his ill-fated press conference (damn that Joker *shakes fist*…actually Joker is awesome!) I took two re-rides on Dark Knight without getting off since the pre-show hadn’t let out yet meaning that there was no one at all waiting in the station (ha!) I shut my eyes for the entire second ride in some type of attempt to heighten the thrill. 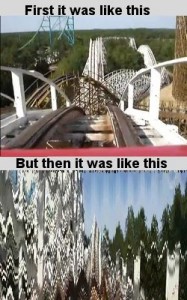 I was hungry by this point so I got a plate of fries from Johnny Rockets and devoured them while walking across the park to El Toro. Once I got over there, I decided to ride Rolling Thunder first which was only running the right track and had no wait. Rolling Thunder seemed to be running faster than normal that night and as a result I was COMPLETELY BEATEN TO A PULP. The first set of hills were rough as hell, the first turn totally killed as it tossed me to the left side of the seat like a hapless ragdoll; the ensuing bunny hops felt like series of boots kicking me in the ass several times a second, and the final octoganal-esque turn was like being tossed into a paint shaker. I exited the car a pile of mush.

Quickly regaining my composure I headed to El Toro. The line had now swelled to a station wait which was still nothing and I ended up riding near the back somewhere. Like Rolling Thunder, Toro seemed to be running swiftly as well, minus the riding a go-kart down a cobblestone street feel. Finally I ended the night by taking a spin on Kingda Ka which had a station wait. I mulled over waiting for a front seat, but decided to just wait two cycles for a second car seat. Good thing I did too! Upon returning to the station, the train stopped a few feet short of lining up with the gates and the ride broke down. We waited a couple of minutes before being let out of the train however the people in line were S.O.L.

I left at around 9pm; all in all it was a pretty good visit with like no lines!