I always remember a comedy bit that the late George Carlin did about how we all have a part of us that wants to see things get just a little worse and a little more worse and so on. He described it as when he see’s a flood occur somewhere, he just hopes it rains, and rains, and rains for five years, and then it’s cloudy for ten, and three states’ boarders need to be re-established, etc. It’s kind of how some of my friends and I were back when we would make up ideas for a death amusement park just for fun; whatever heinous idea one of us came up with, another would try to top it with something even more atrocious. This fictional death park later became known as the ‘Un-PC Park;’ it’s actually not terribly “un-politically correct” but the name sounded better than just ‘Death Park.’

The admission and attractions at Un-PC Park would be free, just to lure customers in; parking would be $15 bucks however. The guest’s cars would then be valet parked into a giant ditch where the cars would be sold for stripping and scrap; hey, the park has to make money somehow!  The first area people would come upon was Garden of Oddities, a section containing random terrible rides.

One of the main attractions in Garden of Oddities would be a roller coaster called ‘Slippery Steps.’ Riders would pile into a car before traveling up a lift hill. The car would round a turn, and then simply dump the riders out of the car and down a long, waxed, marble stairway. Another attraction would be the Bulimia Helper’s Wheel, a 25 minute long Enterprise ride; simple but effective I think! Another attraction for the thrill seekers would be the “Russian Roulette Parachute Jump.” Ten riders would ascend to the pinnacle of a 200 foot tower riding in typical parachute jump cars decked out with functioning parachutes (instead of that swiss cheese-like fabric that real parachute drops use.) Riders would then endure a short wait at the top while the rides computer system randomly chooses one parachute to not open during the decent.  For nine of the riders, the attraction would be a thrill of a lifetime; for the other one…well, not so much.

Garden of Oddities would also contain the Line Ride; a complete rip-off from a South Park episode. However, instead of the ride consisting of a short line like the South Park counterpart, this one would be horribly long; miles long even! The line would travel across endless switchbacks, down long meandering paths, up stairways, down stairways, across a lake, through a gorilla habitat, up a mountain, across a treacherous traverse with chains and footholds, over a bridge, through the woods, past grandmas house, through a minefield full of bouncing bettys, up a hill, through a meat packing factory, down a street, through a red light district, across a highway (no bridge), and back to where the line starts.

Also in this section would be a food court called Adventure’s in Dining. Some of the fine delicacies would include cow eyes, concoctions of various conflicting food stuffs kept in plastic bottles for months on end (ex. soda, chocolate bars, apple skins, salt, Gatorade, cheese, etc.) and Cookie Crisp cereal. All food may have dirt, bugs, spittle, snots, and hair in it; diners may even get a rodent if they’re lucky!

The next section of the park would be Wonders of Deforestation, a section with less emphasis on dangerous rides but more on poorly themed rides. The main attraction would be Rain Forest: The Ride, a giant 20,000 foot long wooden coaster made from clear cut rain forest trees. Every off-season the coaster would be burnt down and rebuilt from more rain forest trees. 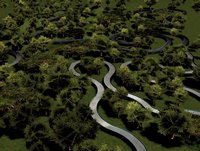 The number two attraction would be Lumberjack’s Revenge, a 50 mile long log flume that would take seven hours to complete as the course winds through the woods and around the park twice. Many other attractions would be themed as buzz saws, axes and other logging paraphernalia. A favorite of the kids would be the Sammy the Saw Show; a musical with the lovable hand saw ‘Sammy’ as he tries to figure out a way to cut the rain forest down while avoiding killer, acid tripping hippies who want to save the forest.

This side of the park would also have many off-limit areas that would be left un-gaurded for curious guests to venture through. These areas would be heavily booby trapped with triggered rock slides, bear traps, tripwires set up to mines,  wolves, and pro wrestler New Jack weilding an Xacto knife.

If guests dare to venture to the other side, they’ll find attractions that are even more abominable…

After leaving Wonder’s of Deforestation, one would come upon “Oh Hell!”, an area themed after the depths of Abaddon in all its horrible-ness. The premier attraction would be Satan’s 31 Flavors, a record breaking looping coaster. This demonized doom coaster would feature 31 inversions, speeds up to 500mph using a small nuclear charge to launch the trains, vertical forces in excess of 95Gs, negative forces nearing -70Gs, a high speed decuple helix, too low headchoppers, DNA tickler inversion, high speed ‘trick-track,’ acid splash segments (instead of water splash,) and brakes that stop on a dime. Only Beelzebub himself could make it off this coaster alive. I’ve taken the liberty of making a virtual mockup of the coaster using No Limits…

Satan’s 31 Flavors from The DoD3 on Vimeo.

Another more hideous attraction would be Unspeakable Symbol, a dark ride past a 50 foot high ‘sacred’ symbol. Hypnotic, brainwashing tones would be played throughout the ride along with subliminal messages to convince people that the symbol is some type of divine idol; riders would leave the ride as adherents to the symbol. Unspeakable Symbol riders would start making pilgrimages to the park to see the symbol again; constructing shrines to the symbol; designing their house around the symbol; culminating in them becoming rabid recluses that live their lives to serve the symbol and rid of anyone who questions their belief.

Some of the shows in Oh Hell would include satanic rituals, animal sacrifices, Norwegian black metal shows, insorcisms (the opposite of an exorcism…I guess,) and “how to devil worship” group participation exercises. One of the more popular ideas amongst my friends was to have a death metal show where people are pulled up on stage and told to stand on a large, shallow sheet of water. The metal vocalist would say something like “dance for me minion!” and the water would begin to pulse with electric shocks. We guessed that it would result in someone flopping around in a ‘dance’ of pain or something! 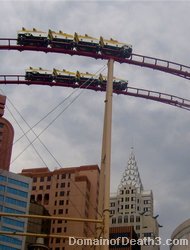 Part of 'Sunday Driver'...it looks a lot like Manhattan Express!

One of the final major sections of the park would be MuggyLand (I called it Liberty City in the last article…silly me), an urban, crime ridden, city themed area. The star attraction of this area would be ‘Sunday Driver’ a racing, interactive coaster. The ride would start with one train, the criminal train, rolling down a mockup of a busy street while the other train, the police train, is in a doughnut shop. The criminal train would then participate in a drive by shooting game with animatronic men, women, children, cats, dogs, birds, etc. The police train in the doughnut shop would then have to play a game to finish their doughnuts and coffee before being launched out after the other train. How that game would work, I have no idea.

The two trains would race around the area, while riders shoot their light guns at targets on the other train. The trains would dive around buildings, through busy intersections, and even right down some pathways traveled by park guests; the people walking would have to get the hell out of the way or become a coaster train hood ornament.

MuggyLand would also have a bumper car ride called Road Rage Battle Arena. Riders would enter the building and choose a weapon to bring with them to their car. They could choose from bats, spiked clubs, chains, throwing knives, crossbows, bricks, socks full of pennies and much more. Riders would then drive around in their bumper cars (outfitted with spikes on the hood, rear bumper, etc) trying to beat the hell out of anyone they see. The winner…well the winner walks away from the ride; the others are carried out on stretchers.

Along with a terrible coaster and some dangerous bumper cars, MuggyLand would also  have a vast selection of games where guests would be able to win prizes. For example, there would be a basketball game where the player must make a basket. However the ball would be over inflated, the basket would be oval, players would have to make the shot from 50 feet away and the backboard/basket would have a forward and backward movement controlled by the carny running it. Another game would be a simple shoot out the star game; although instead of using automatic bb guns, players would use Red Rider bb-guns. Additionally the back of the shooting area would be covered with a stretched polypropylene fabric so that shooting ones eye out would be a very real possibility.

"Shoot the Underpaid Jerk Off", another rousing Un-PC Park game.

The pinnacle of Un-PC Park’s ‘existence’ came in 2004 when I made a Roller Coaster Tycoon 2 version of the park and uploaded it to Coaster Crazy (back then known as WeeWeeSlap.com…a name that may just have been more off topic than mine.) To my total non-amazement, the park was soundly crapped on by a couple of members who didn’t get the joke, even though I warned that it was a joke park some four times. I also remember saying in the description something like “I hope you know all of your bad words before downloading this park!” Some member quoted that saying that I was basically a bad influence and that it wasn’t cool; however if that person simply loaded up the park, they would have seen that I just made that up to make it sound worse than it really was! I contemplated making an updated Un-PC Park recreation for Roller Coaster Tycoon 3, but that never came to fruition.

By the way, here’s the link to the Un-PC Park download at Coaster Crazy.

Un-PC Park actually had many more rides, but most of them weren’t as notorious as the ones mentioned in these two articles; however, I may do small Un-PC Park ride features in the future. Anyway, after reading about the Un-PC Park, I’m sure you have a few awful ride ideas of your own! Or perhaps you had some ideas beforehand, you sicko! Whatever the case is, drop a comment describing your horrendous, diabolical, dastardly, or abominable idea! Nothing offensive however; Un-PC Park may be terrible, but it’s not out to offend the masses…only maim them.