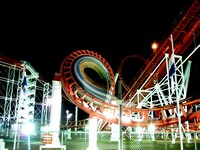 It’s now official, Great American Scream Machine will close for good on July 18th, 2010. According to the Great Adventure Facebook there will be a contest where 25 winners (and a guest of their choosing) will get exclusive ride time on GASM from 10-11:30 pm on July 18th. All you have to do is send in your best scream face! Details can be found here. 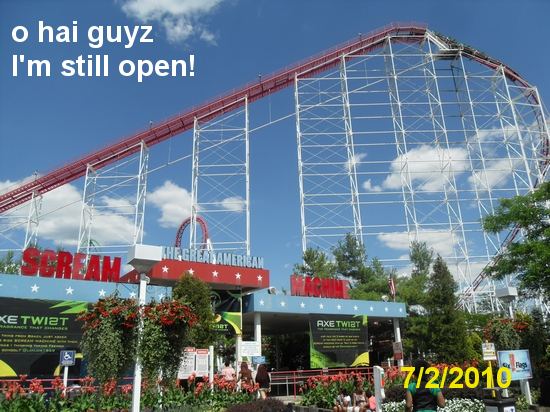 Well, well, well…looks like part one of this rumor, the closing on July 1st part, has been BUSTED. EDIT: The closing date is the 18th!

A big rumor dropped this weekend that the Great American Scream Machine will be closing on July 1st July 18th and will be replaced in 2011 by Chang, the now in pieces stand-up coaster that was all but confirmed for Six Flags Great America. Chang was removed from Six Flags Kentucky Kingdom last season after being at the park since 1997.

So, I might be in the minority here but I think this is awful news! Sure Scream Machine is old and a bit rough but it’s also one of the most intense rides at the park and it’s one of only two megaloopers left (the other being Viper at Six Flags Magic Mountain.) Scream Machine represents the pinnacle of the coaster race where higher, faster and more disorienting were all the rave while comfort and aesthetics were commonly omitted. Hell, Scream Machine was the tallest coaster in the world at one point, only to be supplanted by the 200 foot Magnum XL 200 soon after.

Ride it while you still can folks! You’ve got until the 18th!

EDIT: The Suburban Chicago News website ran an article last week that Six Flags Great America had canceled the proposed coaster and meeting with the local zoning board. Interestingly the online article is now gone and the print version of the paper apparently issued a retraction regarding the article. Hmm…seems like somebody didn’t want this information to be known to us common folk!