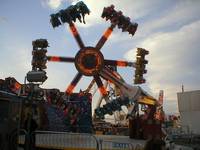 The Spin Out is a KMG/Tivoli made ride that is seen in quite a few places nowadays. It’s basically an arm with a large claw looking wheel with sets of seats on the ends. Each set of seats contains 4 seats and a large harness to keep riders in. The entire ride sits on a circular platform that can rotate. KMG also manufactures a ride with virtually the same specifications as the Spin Out called the Move-It, which is seen more in Europe.

Once everyone is loaded, the ride op goes to the center of the claw and asks everyone to sit back and keep you’re hands down. The operator then pulls a handle which jolts the harnesses downward.

First the platform begins to rotate, then the arm raises, and as the arm raises the claw begins to spin. Once everything is in place, the arm starts to roll horizontally flipping the claw over. That’s the ride basically; the platform rotates, the claw spins, the arm rolls, and the passengers go nuts. Whenever the claw is upsidedown, the claw and platform are rotating in the same direction which pushes riders into their seats with the extra centrifugal force. It’s an interesting ride, but not the best thing ever from a ride experience standpoint; it’s all just too choreographed feeling.

The Spin Out racks on one trailer, meaning that it’s easier and more cost effective to move. Considering the nature of the ride, it’s almost certifiably a ‘major’ ride on the midway which means that carnival companies can charge more to ride it. Since the ride doesn’t cost much to move, the money from ticket sales doesn’t have to be poured back into moving expenses for the ride! This is why the Spin Out is so widely seen on the carnival circuit today. It’s also fairly cheap as far as carnival rides come.