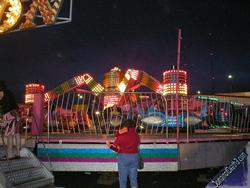 “I wonder if it’s short because the spinning is so bad?” That, said while waiting in line, pretty much summed up the Tivoli made Scorpion. It’s not a surprise this ride was made by Tivoli seeing as they make some of the most intense rides on the midway. Tivoli contraptions such as the Orbiter, a more common fair attraction, and the Force 10, a much rarer one, both inflict some high centrifugal forces; Scorpion is no exception.

The Scorpion is made up of three inverted V shaped arms with a seven car wheel attached to each arm. The cars are free swinging and are equipped with a heavy lapbar. The lapbar is very loosely locked and is able to lift up quite a way from the riders laps even when secured.

The ride starts with only the center hub moving causing the wheels to slowly revolve around the platform. After a little spin around the loading platform, the wheels begin to spin sending the cars sideways due to centrifugal force. Because of the small wheel diameter and the fast RPM, riders are absolutely pinned to the seats. That lapbar which locked in loosely is now virtually impossible to lift up and lifting up your feet is a challenge as well. The forces felt are worse than an Enterprise to be honest! After the wheels have spun up the arms begin to rise until the wheels are tilted to about 30 degrees. During this time the wheels are spinning fast enough to make the cars fly out completely sideways, if not more, at the top of the rotations. Maybe a minute or less later the arms lower and the wheels spin down quickly which left me with a still spinning feeling for a few seconds.

The Scorpion I mention in this review has the wheel and center movement all counterclockwise. Normally, the two rotate in opposite directions, making the ride not as intense as it could be.

After digging around, I actually found the video I took of the particular Scorpion in this review on some ancient hard drive I still had.