Hurricane, made by Dartron and formerly by Hrubetz, is really one of the quintessential carny rides. It absolutely reeks of carnival in terms of its appearance, sounds, and ride experience! It’s made up of a large tower with six, four person cars at the end of six long arms. The arms are attached to the top of the tower and are able to swing out to a horizontal position with the help of air pressure. The cars themselves are attached to pulleys that keep the car sitting upright when the arms swing out. 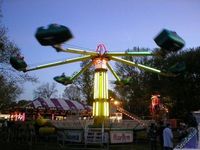 A bit of advice, if you’re with another person and there aren’t many people getting on the ride, make sure you take separate seats in the car (ie. one person in the back, one in the front.)

Riders are secured in with a standard ratcheting lapbar with no padding; older models use a flip down bar that locks much like a Paratrooper with one of the doorknob looking locks. Once everyone is secured, the ride starts to spin. The ride rotates at a pretty good clip and pushes everyone out to the sides of the car thanks to the centrifugal force. The lapbar will dig into your leg a bit if your riding alone in a seat; if you’re riding with someone, the lapbar will hurt…a lot!

Next the arms begin to swing out via compressed air blasts. The arms gain height with each swing until they are completely horizontal. You really fly high at the pinnacle of the swing and when the cars drop back down you get a quick sideways snap due to going from a large spinning radius to a small one. Once the air reserve runs out, which is pretty quickly, the ride op will sometimes just let it spin for a bit until the tanks refill, and then do it again. 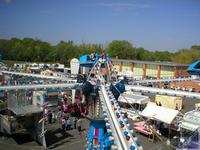 There is a newer version of the Hurricane called “Downdraft,” which is the same ride only your legs dangle from the car. It also looks like the cars are tilted a bit more so you don’t experience the uncomfortable lateral Gs of the original Hurricane as much, then again I really don’t know. I’ve also been on another ride at Coney Island called “Saturn 6;” it’s like an older version of the Hurricane made by Mulligan. The difference is that the center tower is a bit fatter and the car don’t compensate for angle; meaning you are sideways when the arms are flung out all the way.

A somewhat funny story about the Hurricane was when I was on it with one of my friends back in the day. He was sitting in back of me and was doing something to annoy me during the ride, I forget what. Whatever it was, I had enough of it so I spat onto the unoccupied part of his seat. due to the lateral force, the spittle started creeping towards him. The ride ended before it hit him which is alright considering that it was more fun to watch him stare at it and try to get as far to the side of the seat as possible.

That was an awful story, actually!