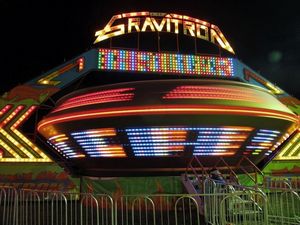 If there is one thrill ride that is so common that just about every medium to large fair has one, then Gravitron is it. Gravitron is a ride manufactured by Wisdom Rides and is basically an updated Rotor ride. The ride debuted in 1983 and quickly became a hit on midways due to its high thrill factor and ease of transport.

The ride is stylized as a UFO and goes under three general names: Gravitron, Starship 2000, and Alien Abduction. The outside features quite a bit of lighting along the side panels and on the rotating platform – which I’ll just refer to as the UFO. The ride originally used turbo lights but newer models are generally outfitted with LEDs. Artwork varies but it’s typically space or alien related. Gravitron models sport a light board below the “Gravitron” signage that flashes the word “Thriller.” I have seen it say different things, however (such as the show’s name.)

The ride can spin to a maximum speed of 24 RPM and rotates via a tire drive that runs along a rim on the underside of the UFO. The ride is extremely portable and can fold down onto a single 48 foot trailer.

The interior of the UFO has multicolored lights running along the ceiling sweeps and typically has a couple of speakers blaring music. The roof of the UFO is simply adorned with a canvas and the walls are made up of 45 individual panels that riders stand against. In the center is the operator’s control booth, immune to the G forces. 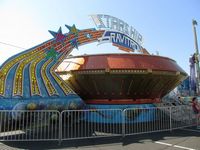 First you board the UFO and stand against one of the padded panels; the panels are angled so riders kind of lay back onto one. The ride op closes the hatch and the ride starts to spin…and spin…and spin some more until the riders are stuck to the wall.

On an old Rotor type ride, the floor would mechanically lower upon reaching a sufficient speed. On Gravitron it works a bit differently; at a certain speed the panels slide up the wall due to the centrifugal force pushing on the tilted panels. Since the riders are on the panels, they rise up as well!

DoD3 ProTip: Don’t ride this if you have sunburn!!

I went on the old Gravitron ride at Morey’s Piers many, many years ago with sunburn on my face, and man oh man did it hurt when my face was being pushed back from the G force!

And a video of Blue Sky Amusements’ Starship Gravitron