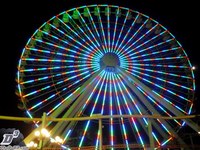 Ah yes…the Ferris Wheel; a staple of fairs and amusement parks big and small. Some places have Big Eli wheels which are usually found making their rounds at carnivals. Some parks and fairs opt for larger versions, such as the Chance’s big wheel. It’s portable and quite tall. Large parks however need something that will wow visitors and make the acrophobics tremble in fear. You would be hard pressed to find a Big Eli at Six Flags! Instead you would find giant Ferris Wheels that tower over many of the rides and even coasters at the park.

Many different companies make large ferris wheels. The Giant Wheel at Morey’s Piers in Wildwood, NJ for example is made by Vekoma. The Big Wheel at Six Flags Great Adventure is an older model designed by Schwarzkopf. Other manufacturers of ‘giant wheels’ are Gerstlauer, Intamin, and many others.

On the Big Wheel at Great Adventure

If you look at it at face value, then it’s just like any other Ferris Wheel. You get into a gondola and begin to travel around its circumference as it slowly revolves. The thing that makes the difference with Ferris Wheels is usually location. The Giant Wheel at Morey’s Piers for instance is located right on the coast and gives a great view of the Atlantic Ocean and the island of the Wildwoods. This wheel also features LED lights along the sweeps and features a 10-11 minute light sequence.

The Big Wheel at Six Flags Great Adventure is located in a heavily wooded area of New Jersey. You get a nice view of the surrounding landscape from the top but you also get a great view of the park’s roller coasters; several of which are taller than the wheel itself! The lights are arranged in a curving layout and  sort of have a flower pattern to them. Makes sense as it was originally installed at a Tulip festival in Holland.