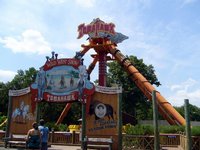 Tomahawk, a themed Frisbee at Six Flags New England. Thanks to Thrillride93 for the pic!

The Frisbee is held up by 4 massive support beams which attach to a hub at the top. A large arm hangs down from the hub at the top and at the end of this arm is a fairly large circular platform with seats lining the perimeter that face toward the center of the platform. The restraints on the Frisbee are standard shoulder harnesses. They are the same harnesses found on a Top Spin I think. The seats are very uncomfortable on this ride and the seat back features a curved headrest that is too small to fit any rider’s heads.

Once you are secured, the ride begins to swing back and forth like a pirate ship ride. Before a full swing is completed, the platform begins to spin slowly. A full swing on the Frisbee isn’t that high; it swings about as high as a standard pirate ship type ride really. It’s not nearly as high as the Giant Frisbee or the KMG made Fireball which complete incredibly high and forceful swings. Though, the Frisbee makes up with the speed at which the platform rotates. After a nice jaunt of slow spinning and decent swings, the platform slows down and changes direction. Riders who haven’t been on this ride before usually whine at this point with comments such as “that was it?” or “that was weak!” We seasoned riders know better though!

The platform changes the direction of rotation, and then begins to spin at a furious rate. At this point, riders are absolutely pinned to their seats and their heads are forced into the headrest that was once too small. The spinning can get so disorienting on this ride that you don’t even notice that the ride is still swinging back and forth.

The Frisbee has many rides that resemble it. Huss made a Giant Frisbee ride which a few parks have. It’s a bit different as you sit facing outward as opposed to facing the center of the platform. It’s also much higher, and the swings are absolutely massive. Mondial made their own copy of the Giant Frisbee. As said before, the KMG made Fireball is similar to the Frisbee, only you ride in 6 sets of cars that hold 4 people each. The cars hang from the top by a claw-like structure. The swings on this are also much higher than the Frisbee.