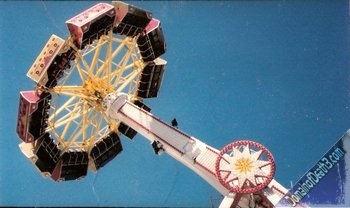 Evolution is a gradual process in which something changes into a different and usually more complex or better form. I guess that sort of vaugely has something to do with this ride. They can call it whatever the hell they want to however because this ride is just plain good.

Evolution is a hard to miss ride on the midway; it’s big, imposing, and loaded with flashing lights. Many of the ones you’ll find at local fairs in the US and abroad are made by Fabbri, and are much less intense than their counterparts (more in Other Info.) Evolution is composed of a large boom with a small wheel that holds 10 riding compartments at one end and a counterweight on the other end. The riding compartments have 4 seats each with a harness and overhead bar to secure riders in.

A ride cycle on the Fabbri made Evolution starts with the wheel spinning up. It spins pretty slowly, and remains at the same slow speed throughout the ride. Next, the ride compartments mechanically turn so that riders are facing skyward. Finally the boom starts to slowly revolve. That is basically the whole ride, but the motion the riders experience is very odd…

As I alluded at the beginning, there is another type of Evolution ride which is made by Nauta Bussink. The Bussink Evolutions are grotesquely large, really fast and very hard to come by. Excalibur at Six Flags St. Louis is the only one in the US. This actually used reside at my home park, Six Flags Great Adventure, with its original colors and name; it was removed in 2003. I never got to ride it because it was nearly always closed. The difference between the Bussink Evolutions and the Fabbri models besides size are that the ride compartments hang freely so instead of the wheel spinning slowly, the wheel spins up to a speed comparable to an Enterprise and the compartments swing to an upward position using the centrifugal force.

The Bussink Evolutions can hold an incredible 64 riders per cycle (as opposed to 40 for the Fabbri model,) and are about 110 feet high. Besides Six Flags St. Louis, the other Bussink model is rumored to be somewhere in Asia. A third one supposedly resides in storage in the Netherlands. So I guess the only confirmed running Bussink Evolution is the one at Six Flags St. Louis!

The Bussink Evolutions are truly the highest form of flatride you can ever find, and are incredible pieces of machinery in their own right. Here’s an off-ride video of Imperator…finished watching? Good, because there’s also an onride video as well!