Drop Towers are any rides that have a tower structure in which a set of seats is either launched up the tower only to free fall back down or the car is slowly hoisted to the top and then dropped. There are so many different makes of drop towers that I’m just bunching them all together.

There are so many different types that I’ll just group them into three categories: Air Powered Towers, Drop Towers, and First Generation Towers.

Air powered towers, as the name suggest, operate using air pressure.  They launch the seats using air pressure and stop them using air as well. These types of towers are typically manufactured by S&S Power but a couple of other companies also produce them.

Larger S&S towers will have a smooth up and down motion while smaller counterparts, such as Keansburg Amusement Park’s ‘Double Shot,’ have abrupt changes in direction.

Some S&S towers feature a drop, rather than launch, mechanism. Dominator at Dorney Park is one of these, utilizing two towers; one that blasts the car upwards and another that hoists the car to the top at which point it simply drops.

Some S&S towers can do both, such as Funtown Pier’s Drop of Fear. A cycle on Drop of Fear consists of a launch followed by a slow hoist to the top of the tower. Once at the top, the seats momentarily pause before dropping. 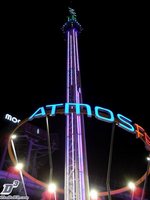 These are the purist form of drop towers; you’re hoisted to the top and then dropped! Unlike air pressurized towers that use cables and pulleys, drop towers typically have little resistance and are only stopped by means of magnetic brakes.

Examples of pure drop towers include the Intamin ‘gyro drops’ which hoist a large, rotating ring of seats up to a substantial height. ARM rides offer drop towers that rise a 12 person car up to about 140 feet. Other drop towers seat riders in individual rows of seats. The seats are all raised to the top and dropped at approximately the same time. Zumanjaro at Six Flags Great Adventure, the tallest drop tower in the world currently (as of 2016 at least) is an example of a multiple seat drop tower. 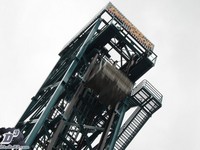 One final type of drop tower are the Intimin “first generation” free fall towers which very few parks currently have. They use cars with wheels on the back and bottom which are hoisted to the top via an elevator system. At the top, the car is pushed forward onto the drop track where they fall after a brief pause. After a moderate vertical drop, the track levels out, leaving riders looking skyward. The car then enters a transfer track where it’s flipped back to its original position and sent backwards into the loading platform. It’s like of like a giant Rube Goldberg machine; it does all this stuff simply to drop people. Demon Drop at Dorney Park is a first generation drop tower.