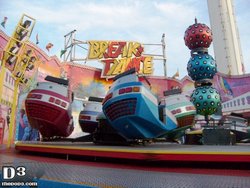 Break Dance is manufactured by Huss Rides and is essentially a souped up Tea Cups ride. Break Dance can be classified as a “music ride,” a ride that uses lights and music as way to draw in riders.

The ride is comprised of a large turntable holding four or six satellites, depending on the model. Each satellite holds four cars that are able to freely spin. The cars are mounted in such a way that they’re level when pointed outward but tilted when pointed inward. Some Break Dance rides have cars equipped with a wheel which riders can turn to spin the car.

According the the Huss Rides website, among other features of Breakdance such as “variable electric motors” and being “an impressively large, fast and attractive ride”, they also add in that this ride has “a high flirt factor due to gondola design and opportunity for interaction.” Well damn, those people at Huss just thought of everything, didn’t they? 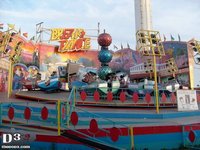 Riders choose a car and flip down the overhead lapbar. The bar has a sliding lock on one side operated by a small handle. Some models of Breakdance have locks that can only be opened by an attendant, because you know, us riders can’t be trusted to not open the lock and be flung from the car. Once everyone is loaded, the turntable and satellites begin to revolve.

The ride now depends on how fast the park or carnival wants to operate the ride. Some places may run it on a slower speed to appeal to families, while others may crank up the speed to draw in teens and adults. 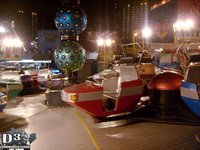 The best Breakdance I have ever been on was at Astroland located in Coney Island, NY. The ride was run as fast as it could go and whipped riders around mercilessly throughout the cycle. It was the only ride where I found myself clinging to the lapbar. Unfortunately, Astroland’s Break Dance was removed when the park closed in 2008. 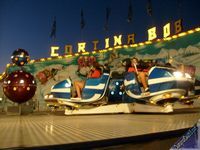 Due to Break Dance’s success, many companies decided to make their own versions of the ride. The most widely seen clone is Crazy Dance manufactured by Far Fabbri (currently Fabbri Group.) Crazy Dance is more portable than its Huss counterpart but seems a bit slower than Break Dance. Crazy Dance is probably best known by a lot of people for the scene in Problem Child 2 where Junior cranks up the speed to ridiculous proportions, leading to an equally over the top puke-a-thon.

In attempt to jazz up the ride a bit, Fabbri Crazy Dance has an upgrade that adds lifting arms to the satellites to tilt them slightly.

And here’s a video of Kinzler’s Breakdance No.1, a Breakdance 2 model. As an added bonus, the beginning of the video features how the boarding process works at European funfairs. Video thanks to Youtuber fandefete.