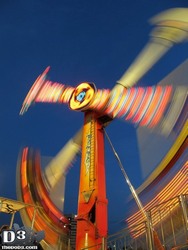 Banzai is a ride manufactured by Far Fabbri. It’s essentially an inverted version of their Kamikaze ride that’s been hugely popular in the past.

Banzai consists of two arms and a center support attached to a large platform. The arms each hold a row of seats on one end with a counterweight on the other. Banzai, like Kamikaze, can hold 32 passengers. Some versions can carry up to 48 passengers, such as Zamperla’s ‘Hawk’ model. Banzai tops out at 56 feet and can rack onto one trailer, making it an easily transportable ride. 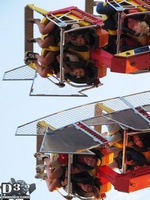 The riders hop into their seats and are secured by a harness and a steel overhead bar, which seems to be there simply as a backup lock. The arms then swing back and forth until they finally complete a full loop. That’s the ride really!

The ride can be run at a brisk speed or at a slower, more hangtime laden pace. Typically, cycles will offer both types of ride experiences. The ride might swing back and forth until completing a loop and then do a few quick loops before changing direction. Direction changes usually happen after suspending riders upsidedown for a period of time. 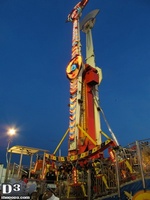 A little secret is that Banzai can actually complete a loop without the need to swing back and forth. The counterweight is about as heavy as the passenger load. I remember seeing a Banzai ride have a power cut once and the arms rotated freely until the ride was reset, which took maybe 30 seconds thanks to the diligence of the operator. 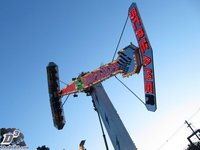 There’s a few Banzai clones about, namely Zamperla’s Hawk model, but the original Kamikaze has been replicated numerous times. Kamikaze probably stemmed from the Eyerly Loop-o-Plane. Holding a grand total of 8 passengers, the need for something larger was inevitable. Kamikaze was such a hit that ARM started making Skymaster, which is almost a direct copy of Kamikaze. Mondial, Vekoma, ARM, Meisho and I’m sure a few others all make Kamikaze clones as well.