If you want to browse through the Play2Win Screen Caps album, then hop on over to the DoD3 Gallery!

First off, if anyone reading remembers the old Play2Win page here at DoD3, then you’ll remember that it spanned some six pages and covered every detail of the show. It had the distinction of being the first Play2Win fan page but more importantly brought waves of hits to my site! Since DoD3 v1.2, I’ve decided to condense the Play2Win pages into one page. Why? Because A. I don’t feel like re-doing 6 pages on one thing and B. because no one cares about the show anymore.

Play2Win was a late night ‘interactive gameshow’ produced by the Netherlands based 3CirclesMedia that aired on CW-11 and WGN in the US. Play2Win actually aired/airs in many different countries such as Canada, The Netherlands, and India. The premise of the show was that the viewer could call in, solve the puzzle shown, and win some cash. These types of interactive gameshows seem to have fallen by the wayside however, at least in the US . 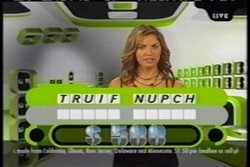 Tara and a Shuzzle…gee, what’s the answer…

Play2Win originally started as Text2Win, which aired as a one week pilot on CW-11 in August of 2006. The pilot aired locally in the New York City area; I remember surfing the channels late one night and stumbling onto Text2Win and thought it looked really…interesting. It had this green screen background, loudly colored graphics, weird electronic coffee house music, and of course the mandatory eye candy host. At the end of the one week pilot, I remember hostess Tara saying something like “we might be back again.” Yeah, we’ll see hun…

The show did indeed come back as Play2Win on October 16, 2006, this time with two hosts; the original host Tara and newcomer Amber. The show had the same look as Text2Win until it switched graphics at one point. Later on in the life of Play2Win they actually made a set for the show, only for it to be used for like two weeks before the show went off in the US. I still have a soft spot for the original graphics however.

While the show aired in the 2-3am timeslot in the US, it was actually produced from 8-9am in The Netherlands. However, the hosts would play it off like they were hosting in the US late at night. Yeah Amber, I’m sure that you’re REAL tired because it’s REAL late.

The way Play2Win worked was that the viewer would call or text in ($1.50 fee) or enter in free online; every tenth entry had their name put into a pool of contestants. When the game was over, a player was randomly selected from the pool and got to play live on air. I have to wonder if that system led to the cancellations of many interactive gameshows; it seems a little sketchy to be honest.

Play2Win featured 10 games, 3 of them were never played but listed in the original cut scene. The games were…

The correct answer would be “ass.” They should have used that one by the way!

The other three games that were never shown were:

The show also had a Jackpot round…unfortunately the jackpot was near impossible to win. During this jackpot round, contestants got to pick three of twelve panels. The contestant would win the accumulated prize amount behind the three panels. If they picked the three panels that contained crowns, they won the jackpot! Near impossible, but not impossible because someone on the Canadian version actually won it. I bet those people responsible for paying the winnings were about to toss the rubber stamp out the window while signing the check.

Part of the fun of watching Play2Win was hearing the callers. Some would have their TV turned up too loud and the delay would be heard on the phone line; others would have heavy accents that caused the hosts to get a bit flustered; and others would have no clue what’s going on.

The hosts as mentioned before were Tara and Amber. Tara Cummins is a Kansas native who seemed like a nice person. One user at the Play2Win Yahoo Group once said that she seemed like “the girl you could bring home to your parents.” We creepers now. California’s own Amber Vineyard (I have a hard time believing that’s her real last name) on the other hand seemed like a party girl. Amber was much more outgoing which contrasted Tara’s lower key brand of delivery. However, both exhibited overly enthusiastic commentary and corny humor, which fit the show to be honest. Occasionally they would give the viewers something to uneasily laugh at; a good example is when Amber did the Thriller dance and then looked embarrassed about it afterward.

Other hosts included Elizabeth, who looked like a living Barbie doll, and Chip the Mute Assistant. That wasn’t Chip’s actual title but the guy never talked at all. He basically stood there, looked good, occasionally winked in approval, and wooed Tara on occasion; damn that guy is good…

Play2Win met its demise in the US on March 10, 2007 after being switched to the 3-4am “this show needs an induced cancellation” time slot for viewers in the Eastern Time zone. Tara went on to bigger and better things (I guess); Amber is poised for her big break (I guess); Elizabeth, well I don’t know (certain); and Chip remained awesome (no doubt about it.) Will Play2Win ever come back in North America? I doubt it, but the show had a nice little run.