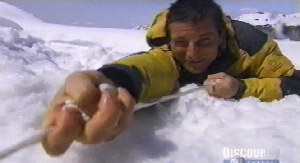 So, suppose you’re stuck in the wilderness with no food, water or any civilization for hundreds of miles. You need to find a way out of the situation with the alternative being death in various forms, whether it is by becoming severely dehydrated or being mauled by a bear. The Discovery Channel launched a show in 2006 centered around what YOU need to do in the fairly unlikely event that your find yourself versus the elements.

Man vs Wild can be considered the real Survivor show because it’s literally a show that follows survival expert, former British Special Forces soldier, and Everest mountaineer Bear Grylls (what an awesome name) on his journey to escape from the wilderness with nothing but a canteen (with no water), a piece of flint, a knife, and the clothes on his back. He also has a camera crew which I have to assume have everything they need to survive themselves. I beleive they use two cameramen and another survival expert to follow around Bear. I have to imagine that they are equipped with GPS and some type of communication just in case the situation gets sticky. According to the Wikipedia entry, the crew are under orders from Bear not to help him unless he is in a fatal situation. 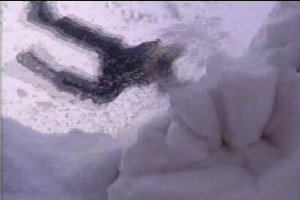 Bear will start every show by parachuting into the wilderness. This ensures that he is literally in the middle of nowhere. Although, sometimes the parachute in is the most dangerous part! On occasion, Bear has had to aim for certain features to land in, such as a lake, due to rough terrain. On one occasion Bear landed on a slope in the Alps only to tumble down the hill and slide to a stop. I really have to wonder how the camera person was in position to catch that.

Once in the wild, Bear usually attempts to get a lay of the terrain from a higher vantage point to see what the best route out is and to see where the best direction to venture for water is. Water is normally his first priority because, well, we need it! Bear will then proceed to show the viewer different things and tactics to use to survive. However, some of the things are a little tough to do for a normal person, either due to the physical requirements or the availability of materials. For instance in the Alps episode, Bear filled his parachute up with snow, tied knots every few feet in the length of rope coming off of it, and then tied it to himself and dragged it behind him as he walked. This was to catch him from falling down a crevasse, in which he demonstrated (pictured above.) When getting out of the crevasse, Bear had to muster all of his strength to climb out via the rope. Unless a massive adrenaline rush kicked in, a person like me wouldn’t have been able to get out.

Another example is when he fashioned up a pair of snow shoes using rope that he had from his parachute and sticks. There’s no way in hell I’d be able to do that; with my luck I’d probably make something that resembled a primative snow shoe, a stick would break off, go through my foot and I’d die from sepsis.

When it comes to finding water, Bear will attempt to find a stream or lake with non-stagnant, clear water. He will almost always boil it as well with a fire that he starts using his flint striker. If water isn’t seen, he’ll resort to eating pine needles, catching rain, if it rains, or even squeezing it out of elephant droppings (too bad I don’t have that picture!) If he’s in a snowy terrain, then finding water isn’t a big priority, unless he’s stuck in permafrost or something. 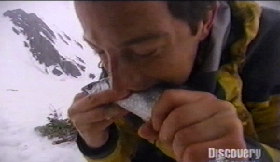 Food on the other hand is a bit tougher to get a hold of. Sometimes he’ll eat berries growing on trees and bushes. For a real meal, Bear usually kills or finds a dead animal to eat. On one such occasion he made a throwing stick, tested his accuracy for a while, and then struck and killed a rabbit in which he cooked on an open fire. Bear makes it look so damn easy! I tell you, I’ve tried hitting rabbits in my backyard with various objects and those suckers are fast a hell! (I may have made that up animal rights people.)

On another episode while in the African savannah, Bear found a dead zebra that had been previously ravaged by other animals and dug into it with his knife and ate the meat without cooking it or anything. I think he even got down and sunk his teeth right into it as well; how damn awesome is that? I believe he mentioned that a zebra tasted like chicken as well.

Rarely will Bear ever just stumble onto civilization; in the Alps episode for instance he saw cross country skiers in the distance and presumably went to their location and followed their tracks back to civilization. On another he found a rope and pulley system inside of a deep river bed and climbed up the ropes to find a few inhabited thatched roof houses bunched together. 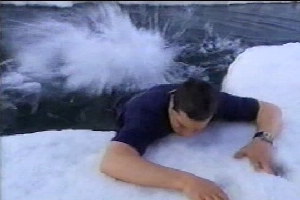 I really think they should rename this show; Man vs Wild just doesn’t do the justice. The new name should be something like “Bear Grylls Eats Weird Shit, Kills Animals, and Hikes.” I mean, that’s pretty much the whole show…but that’s enough to make the show great! Of course, my sister hates the show, and Bear, because of the “kills animals” part. But those animals were there for a reason; for Bear to eat and live to make another awesome episode.

After much thought, my friend and I firmly beleive that if it came to Bear vs a bear, then Bear Grylls would win…with only a knife.