Cartoons are usually directed at kids, but occasionally you’ll get shows like The Simpson’s, South Park or Family Guy that definitely aren’t. However, these cartoons targeted at adults are typically humorous. A cartoon depicting any serious genre just wouldn’t be taken seriously, right? Things seem to change when you start looking at Anime however.

For the uninitiated, Anime is the style of animation that originates from Japan . Classic examples are Speed Racer, Sailor Moon, and Dragon Ball. Those three are sort of cartoonish though. Animes with serious themes are not uncommon, and for some reason they don’t seem to lose any validity despite being animated. A good exaple is the 2001 martial arts anime Baki the Grappler.

Baki the Grappler is about a 13 year old boy named Baki Hanma who wants to be the strongest grappler ever. Yeah, the plot is pretty simple, but why make it complex? After all, Baki is primarily a fighting anime. Anyway, Baki feels that his training regimen hasn’t been good enough. He makes this deduction in the first episode after failing to beat 100 guys in a street fight. “Man, only 37…” Baki says. Well, I guess I see his point; if you’re going to go against 100 guys, many of which yielding pipes and other objects, then you’d want to beat all 100 (or at least 50, which Baki was apparently “pulling for.”) 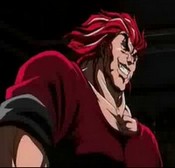 Wanting to achieve his ultimate goal, Baki decides to take training into his own hands. This training involves retreating to the wilderness and staying with some dude who sterilizes wounds by setting off gunpowder on the area; beating up freakish animals; and pissing off a horrifyingly large, 15 year old Yakuza boss. 15 years old, that’s no typo. If a kid is only 15 and already a boss of organized crime, then he’s probably pretty damn dangerous. By being the top grappler, Baki hopes to impress (and beat) his estranged father, a badass by the name of Yujiro Hanma.

The first 24 episodes of Baki the Grappler deals with Baki’s training and major plot development that I won’t go into. To be honest, my description above is very simplified as to not divulge too much of the plot. The the next 24 episodes, takes a different approach with Baki competing in an ‘underground’ tournament (underground enough to be held at the Tokyo Dome?!) with about 39 other guys.

Every match is depicted and all of the opponents undergo some degree of character development. I found this to be a lot of fun to watch; who was going to win the next match and go on? It actually got to the point where I wanted secondary characters to win the whole damn thing! Namely (for the people that have watched the show) the Shinshinkai master (and master of arrogance) Katsumi Orochi and wonder surgeon (and overly conceited)Kureha Koushou.

One thing I ‘like’ about the contenders in Baki is that some of them are just downright monsterous; ‘like’ to the point where you just smirk and mumble “what the hell?!” Fighters like Jack Xamma, Andreas Zargon and even Hanayama are just so unbeleiveable. Especially Xamma with his muscle upon mucsle build and fighting tactics that range from mimicing a dog to just standing there like a statue.

As far as the animation and style of the anime; the characters are detailed and the colors are just a bit muted to make it less cartoonish looking. The fight scenes are Matrix-like in terms of style with moves that are overly powerful or gravity defying. Occasionally the action will be slowed down to see what is happening. Other times there are stills during a particularly powerful hit. The fights usually have some sort of commentary to them as well whether it is from someone watching or by the announcer in tournament.

All in all, Baki the Grappler is a fun anime to watch; particularly fun for those who like karate style shows/movies with tons of fight scenes. The plot isn’t as thought provoking as some other animes but that doesn’t really take away from the series. If you like some good ol’ ass kicking action, then take a look a Baki the Grappler.