I took five years of Spanish spanning from grade school through high school. Actually it’s more like four years because the first year was a Spanish class that the school newly introduced. Us 8th graders barely learned a thing outside of ‘si’ or ‘hola.’ Actually the teacher did teach us a few curse words which was funny since this was in a Catholic school. The next 4 years were real Spanish classes and after four years I still have no idea how to speak Spanish. I can decipher a few words per sentence and take some sort of crude shot at what the person may be saying but that’s it. Not that the goal in those classes was to teach students to speak fluent Español but I’d bet that some can hold a basic conversation In every Spanish class I would get like a D or C as the final grade, I plain sucked at it.

Someone might say that I just didn’t try hard enough, and you know what…those people are right! I was recently cleaning out my room and I found an old Spanish class worksheet in a folder that had fallen behind a large set of drawers. The sheet was from my junior year; talk about my old room being a friggin tomb! One look at that sheet told the whole story as to why I did so poorly in Spanish class… 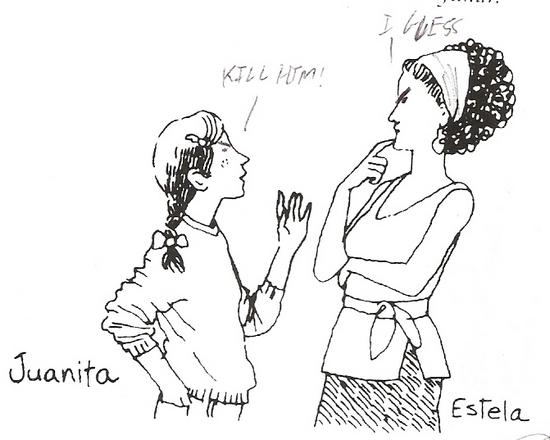 In junior year’s Spanish class, I sat around a bunch of equally juvenile people which is probably why these drawings came to fruition. Why learn when you can kill time by drawing shit and giggling like idiots? In this particular sheet, the people in the illustration go along with some dialogue below it. I don’t know what the hell we had to do but in any case I had other plans for this sheet. Juanita, complete with drawn in evil eyes tells Estela, once again with drawn evil eyes, to “kill him.” Estela complies with “I guess.” 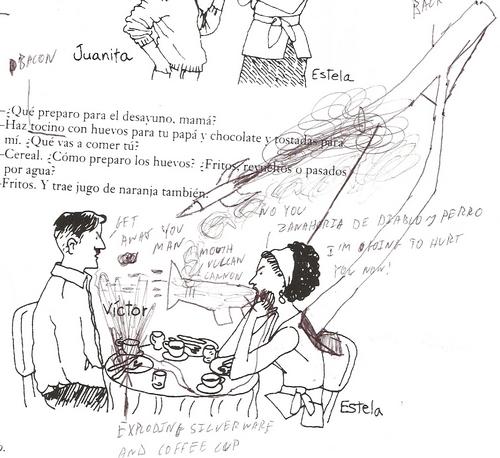 In the next illustration I add much more detail, probably while not listening to the teacher and snickering at its stupidity. It’s probably worth noting that after every drawing I most likely handed the sheet to the people behind me who would then view it and snicker away. In the above drawing we have a lot of things happening; Estela has a mouth vulcan canon, back mounted SSM launcher, and finally the exploding silverware and cup…a nice touch I think. I kind of have to wonder how she would hide all that shit before sitting down for dinner with the guy, who, by the way, looks like Adolf Hitler. He is saying “get away you man.” Lost in the scribbles is Estela’s dialouge that says “No you zanahoria de diablo y perro; I’m going to hurt you now.” “Zanahoria de diablo y perro” translates to “carrot of devil and dog;” I have no fucking idea what that’s supposed to mean. 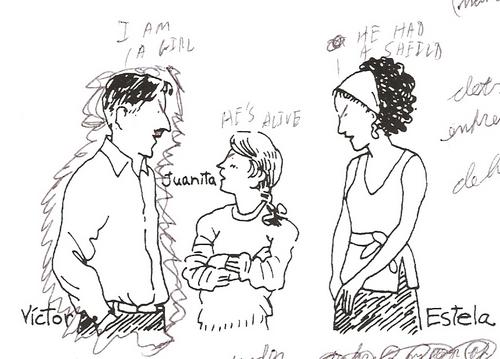 Victor is alive apparently. I was sure the exploding silverware and cup would have gotten him. The girl crosses her arms and says “he’s alive.” Victor barks back “I am a girl,” while the assassin Estela clamed that “he had a sheild.” Victor does indeed have a shield; that scribble around him is supposed to be a shield at least. After careful analysis of the three images, I’ve come to the conclusion that my penmanship sucks.

On the back page I found another little drawing… 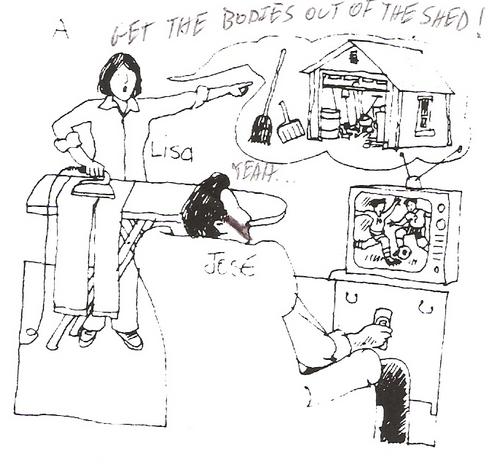 One thing I noticed about these worksheets was that the lines where the answers were supposed to go were not filled in for some odd reason. Actually, no odd reason applies because the reason is right in front of us. I’ll be honest, while at the time I should have been doing my schoolwork, I’m glad that I found this sheet complete with graffiti. If I found it with actual answers filled in with red check marks and a grade or something, it wouldn’t have been a cool find at all! It would have been shit! Boring! So I commend myself for making these drawings in Spanish Class, because they made for some great memories…and an article…years later. Plus I graduated with honors in college, so high school has been basically negated…suck it high school!