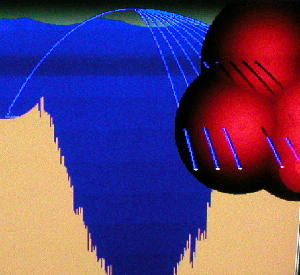 Man, I remember when my family first got a computer. We were kind of late in getting one compared to my friends, we got it in early 1997. It had a huge 1GB hardrive, 16MB of memory, and the processor operated at a speedy 166MHz. Of course back then that was top of the line! Now I carry a 32GB flash drive that’s the size of a nickel.

When we first got it, I didn’t have too much to do, just the bundled software which was extensive since we got the computer from a custom builder. Encarta, Microsoft Games, and random demos and that damn hovercraft game on Windows 95 were my first experiences with computer gaming. One of my good friends then introduced me to a game called Scorched Earth, the self proclaimed “mother of all games.” He gave me a copy on a floppy disk (remember those things?) and I swear to God, I was hooked like hell for the summer. My summer was either bike around town with friends and then play Scorched Earth at their house, or play Scorched Earth in a darkened room with a window unit air conditioner humming away.

Scorched Earth is a DOS game made in 1991 by Wendell Hicken. The game play is very simple, but so random and unpredictable that it’s addicting and re-playable. The rules of Scorched Earth are simple: kill the other nine tanks and live. A standard game will go for 10 rounds but you can set it as few as 1 to as many as 1000 (I wonder if anyone has ever done 1000 rounds in a row.) Upon starting the game you have the option to play around with a plethora of settings that will affect gameplay. Anything from the changing the order of how tanks take their turns to changing the weather and cost of weapons. You can also choose how many opponents you are to face; from 1 other tank to 9 others.

The first real order of business in Scorched Earth is to choose your tank and set the AI for the computer’s tanks. The AI went from ‘ Moron ’ which is basically like an untrained monkey running the tank, to ‘Cyborg’ which is your worst nightmare realized. Contrary to what my friends and I thought back in the day, the last setting of ‘Unknown’ is just a randomizer. Of course we didn’t know that back then; to our knowledge picking ‘Unknown’ as the AI setting was like willingly forfeiting the game.

All of the AI tanks are given names, typically of historical and military figures like Mussolini, Cleopatra, Godiva, and Adolf. If the “tanks talk” setting is on, then a little text will appear above them before they die saying “Goodbye cruel world” or something of the like. You could also edit this so that they say something like “oops I farted again.”

After picking your tank, you got to choose your weapons and accessories from two long lists. On the weapons side you could choose anything from standard missiles to giant multiple bouncing warheads that could wipeout the entire screen if angled correctly. On the accessories side you could pick out items such as parachutes, batteries, shields and much more. My own personal choices are: 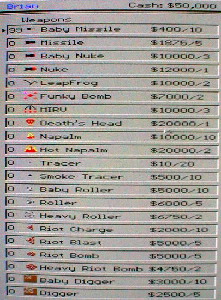 Onto the gameplay itself; first off the length of a single round usually depends on what weapons are fired and how the tanks die. A well placed ‘Nuke’ or “Death Head” will eliminate everyone but you. Sometimes even one tank getting killed will cause a chain reaction of explosions due to a tank exploding, killing the next one which unleashes a spreading “Funky Bomb” that hits 4 other tanks and kills them, etc. Other times it’ll come down to lengthy standoffs between all of the shielded tanks; at that point strategy is paramount if you want to win. 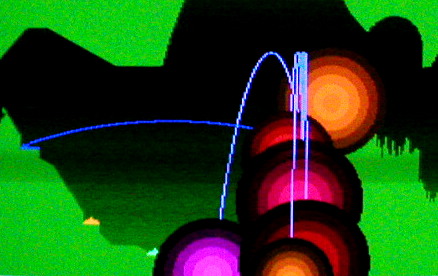 The game is turn based in normal, or sequential mode, so one tank shoots at a time. When it’s your turn, you pick your weapon and then choose your angle and power. Choosing the right angle and power is important if you want to not kill yourself with a larger weapon. Too much power will make your shot fly off screen and too little will make it land right next to you. Same with angle, too high an angle and the bomb will land right on you, too much and it’ll miss its target. A different strategy goes for the spreading weapons which you’ll need to aim high so they have time to spread out and land all over opposing tanks.

Another strategy is to use earth changing weapons such as “Dirt Charges” or “Riot Bombs.” Covering a tank in dirt means that it’ll have to shoot its way out, taking damage in the process. Removing the dirt under a tank makes it fall, and without a parachute it’s almost certain doom for that tank.

The graphics and sound in Scorched Earth are as simple as simple can get, but it works just fine I think. Backgrounds and mountains typically look like something made in MS Paint and the sound comes from the PC’s internal speaker giving it an 80s arcade game sound. Actually, the sound of a tank dying by unleashing one of those triangular shaped dirt charges along with the sound of a humming window mounted air conditioner always reminds me of a hot mid-summer day. How sad.

Scorched Earth is a game that certainly stood the test of time. While games like the Grand Theft Auto series and Command & Conquer are a lot of fun to play; Scorched is still just as fun and always gives me that warm fuzzy feeling of nostalgia when I play. It also reminds me of how much of a dork my friends and I were back in the mid 90s. Ahh…the Scorched summer of 97.