The DoD2 header…yes it was that bad.

The DoD3, acronym for Domain of Death 3, is the third version of a highly unsuccessful line of websites made by this guy. Actually I shouldn’t say that because the third revision has been getting some decent traffic over time. So what was The DoD like back in its early days? How well (or bad) did it do? Why the hell was this site called Domain of Death anyway? Well…here’s the story…

The mascot of Domain of Death, Scary Guy. It was an inside joke, but I did consider making it a mascot again!

In 2000 or so, one of my good friends made a website using AOL’s website service. It was basically a page showing photos of his friends. I remember I had a nice photo on there giving a devil horns hand gesture with some nu metal band poster behind me. After that I thought to myself “well that’s pretty cool! Let me see if I can make one,” so I set up one on AOL. I planned to add band reviews and topics relating to amusement rides, being a hobby of mine.

When choosing the name I wanted something that sounded kind of cool but kind of tongue in cheek as well. I planned that the site was going to have a large concentration of band reviews so I wanted something metal…something HARDCORE sounding. I remember getting a death metal album around that time called Domain of Death by Mortician. At the time I ate up anything that made me feel more metal and this was no different; now I can’t even listen to this album or many of the others that I bought back then. But, the name of their album kind of worked. This was a web domain (well, sub-domain at the time) and there was going to be FUCKIN’ METAL! There we go! Domain of Death was the name. After a little time on AOL I switched the site over to Tripod. At this point I also started utilizing a webpage editor called Cool Page Editor.

One of my stick deaths, Five Banned Game Shows.

At first the site was just band reviews and carny ride reviews but after awhile I saw a site called StickDeath.com. The site had all these GIF and Flash animations of stickmen getting mutilated. Well hell, I wanted some on my site! So I downloaded a primitive animator program and started churning out stick death gifs! At one point I had like 15 on the site and it became the main drawing point of my site.

One of the favorites among friends was a GIF of stick Justin Timberlake on TRL (for you youngsters, thats Total Request Live, a live music video request show on MTV that ran from 1998 to 2008.) Stick Justin was talking to Stick Carson Daly when his hair started growing for no reason. It grew so large that it filled the entire studio and smashed the windows open. All of the people sitting in the studio fell onto a truck carrying an A-Bomb (what a coincidence!) which blew up. At the end it said “see all the crap the NSYNC causes?!” A classic.

All was going well on Domain of Death until…the time bomb code went off. Approximately one year (and like a laughable 150 hits later) Cool Page Editor’s internal scripting kicked in and suddenly you couldn’t switch pages without clicking cancel on a pop-up box that said “Would you like to buy Cool Page Editor?” The frickin thing said it was free! That was the end of DoD1 as I abandoned it soon after; it remained an internet deserted island for many years on Tripod.

Here is the main page of DoD 2.0 as found in the depths of my old hard drive. Look at its awfulness!

In January of 2004 I started on Domain of Death 2.0. I know it was January 2004 because I actually found some of the old .html files that I had edited and saved which most of them had Jan 2004 as the earliest last modified time. This time I was using CoffeeCup Free editor. It seemed like a decent editor, but I was soon to find otherwise! I remember trying to upload the files to tripod but the photos would never load correctly even though everything seemed right! I then lost interest again, discouraged with the photo thing. Looking back it was probably because the photos were linked locally rather than in a web directory.

Seems like I started poking around at web building in July of 2004 according to file timestamps. I seem to remember thinking that I knew what was wrong, whipping up some pages and once again being discouraged when I was wrong. I gave up. Again. DoD2.0 was dead before it even hit the web, but I still count it as a site because, hell, it was a browsable site in my C drive!

On February 28, 2005, 7:02:57 PM I created the index.html page for what was to become Domain of Death III or Domain of Death 3 (or now just The DoD3.) This time I used PageBreeze HTML editor, a program that I continued to use up until I decided that my site would be easier to run using WordPress. I made all the pages I felt like making, deleted all of my old stuff from Domain of Death 1 which was still on Tripod (I should have kept it as a time capsule) and uploaded all the new content in March sometime. 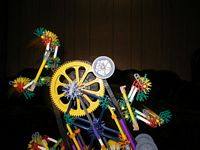 One of my best Knex builds, a fully functional Zipper. I felt bad smashing that thing apart.

The site had all the sections that the DoD3 has now except that it also included a “Knex Rides” section because at that time I still screwed around with those Knex things and made functional amusement rides out of them. The site was all in a format where if you maximized the window then the text would also spread out. There were no tables or divs governing where everything went (funny enough, that type of style is in today.)

A little less than one year later, on February 11th 2006, I started building the next transformation of DoD3. The new format used tables to keep everything in order and had a ‘nicer’ look. The content pretty much stayed the same; I just made the site more ‘aesthetically pleasing.’ At this point I changed every page from .html to .php in preparation for a switch to a different web host. With .php page, I could use “.php include” calls which allow me to update all of the sidebars using one page. Could you imagine updating a sidebar on every individual page now? I think this site has about 500 pages now! Needless to say, I thought I was hot shit with my new design capabilities.

Here is an example of the DoD3 version 1.1 layout. . It looks like absolute shite. Here’s The DoD3 1.2 layout, around when I first introduced WordPress.

As for stats: In 2005, I accumulated 640 pageloads and 283 unique visitors (a unique visitor is one actual visitor) or in other words, complete bupkis. In 2006 I once again received more dismal hittage until about the time when I updated the site. I had about 2,000 hits by then which was nice I thought. I started getting more hits when I added the Action Park page and when someone linked me on Wikipedia’s Zipper page. The hits to my site began to really pour in when I added the Play2Win page in November of 2006. My sites hits shot up and by the end of 2006 I had 8,735 pageloads and 3,487 unique visitors. The Play2win page hits began to wane after the show went off-air in the US but the Action Park page began to get huge hits daily. The Action Park page continues to be the most visited page on The DoD3 and seems to have been used by every major site writing about Action Park these days.

On March 4th 2007, I changed hosts from Tripod to Byethost and I registered the domain “domainofdeath3.com.” On May 19th, 2008 I started work on the next ‘version’ of DoD3, adding in WordPress for a news page and keeping the static html pages; soon after I switched to all WordPress served pages. I then got kicked off of Byethost for using too many resources and went to HostGator (a paid webhost.)

In Janurary of 2009, I built the layout for the 3rd look of the site (DoD3 1.3 I guess.) This layout used a WordPress theme that I hacked to bits. The result looked all right but also had a lot of bad design habits such as usage of tables and clunky image effects. It was also sluggish due to a Frankenstein coded back end. This came to a head in December of 2012 when the site was suspended after an aggressive web spider crawled basically DoSed the site. The newest version of the site went live nearly three years to the day after last update.

In February of 2016, I began work on The DoD3 version 1.4. I’ve come a long way from using Cool Page Editor and shit like that. This time I took a totally blank WordPress theme and edited it bit by bit with HTML, CSS and some PHP. Version 1.4 went live in March of 2016…again, 3 years after the last design change. I also dropped the domainofdeath3.com domain in favor of thedod3.com…a tough decision to make since the former name was coming up on 9 years as an active domain, but I was tired of explaining the URL. I still own it, though, forever linked to the new domain.

Home » Crapstravaganza! » Article Roundup » The Evolution of The DoD3