I’m sure a lot of people have seen events in nature that they thought were pretty cool. Maybe it was a meteor one night or perhaps you’ve seen a tornado right in front of your eyes. Here are three events that I’ve witnessed that I think were incredible in some way. 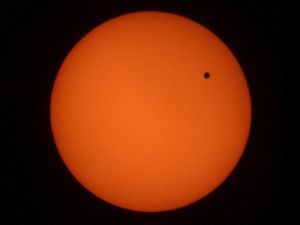 The dot is Venus

Back in 2004, Venus made a transit of the Sun. A transit is when a planet (in this case Venus) passes in front of the Sun’s disc and from Earth it looks like a black dot on the surface of the Sun. A Venus transit is a fairly rare event, it happens maybe twice a century. I of course could not miss this; the next was slated to happen in 2012. I didn’t have a solar filter for my telescope so I was reduced to gathering pairs of sunglasses and putting them one in front of another. I put maybe 6 of them together, then I took a pair of binoculars and looked at the sun and to my sheer amazement I actually saw Venus! It was just a tiny black spot on the Sun; most people would have scoffed at the less than visually intensive sight really. But if you take into account that Venus is just a bit smaller than Earth, you could first easily see just how massive the Sun really is compared to our Earth. 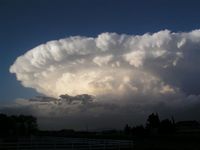 Not the same storm in the story!

I’d say that this took place in 2001 or so. I was home alone during a thunderstorm and I was just sitting on the couch looking out the window. It wasn’t that bad of a storm really. I remember seeing the wind blowing in a west/southwest direction and I remember quite a bit of rain. At one point the rain let up just a little bit, and then came an event that is one of the most vivid memories that I have; I remember seeing the wind suddenly change from blowing southwest to blowing dead northwest along with a great increase in speed. The rain was now blowing straight at the window which is under an overhang (which meant the rain had to be blowing sideways to not hit the overhang.) Just before the rain completely obscured the view out the window I remember seeing a thickening mist of rain and leaves heading towards the house.

This all happened within 2 seconds time maybe and I dashed downstairs right when I saw all of this going down. After about 1 minute of standing in a hallway in the basement, I decided to come upstairs because if something was to happen, it probably would have happened already. I came upstairs and looked out the window to see leaves and branches scattered all over the ground. Nothing happened to the house or anything else though. There were reports on the news that it was a tornado, but I can’t find any record of it from the NOAA so maybe they just jumped the gun.

A little addition to this story was that in 2007 a similar occurance happened. I remember seeing garbage cans blowing down the street, twigs and leaves flying and such. I remember one of my friends calling me up and saying that a few big trees went down around his house and more around the area. I don’t think anyone ever came to survey the area but I’d say that it was probably a microburst or downdraft. 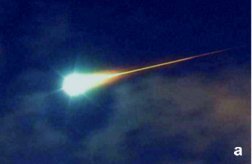 The following story is completely true.

At around 1AM I ventured up to a large hill only a couple of minutes from my house to watch some of the Perseid meteor shower. It was a couple of days before the peak of the shower but a decent amount of meteors can still be seen in the days approaching the peak of this shower. So, I sat on the bleachers of the highschool football field that resides up on the hill for a couple of hours. After getting my fill of meteors, I decided to start heading back home. The time was about 3:10 AM…I remember looking at my watch and then suddenly seeing the entire landscape around me virtually burst into a dull off white light. “What the hell!?”

I looked up and saw a giant searing white ball moving across the sky with a gigantic smoke train emanating from the back. The best way I can describe the way it looked was that it looked like a large white comet only with dark smoke bellowing from the back. It was horribly bright; enough to light up everything around me and cast shadows. The weirdest part came after about 3 seconds when I started feeling a burning feeling across the exposed parts of my body, it felt like I was standing in front of a large fire. I heard absolutely no sound from this object though, which probably meant that it was very high up. After a few more seconds, the object dissipated and that was that. I think what I saw is what is known as a “fireball” or “bolide.” Basically it’s a meteor that is much larger than the standard sand grain sized meteors. It may have been the size of a grapefruit or something, but since it came into the atmosphere at like 100,000 mph, the glowing from friction made it look huge. Though, I could never find anything about any fireball producing a sensation of heat on the observer. That part may have been some type of response to seeing a buring ball in the sky! The fireball was definitely the most incredible thing I have ever witnessed…period.