A number of you looking at this might wonder “what the hell is Islander Raceway and Amusement Park?!” However, I’d be willing to bet that quite a few New Jersey residents, particularly those who venture down to Wildwood, NJ, remember this hole in the wall amusement park in some capacity.

Islander resided near some marshland right before the Rt. 47 bridge that leads into the Wildwoods, a popular south Jersey beach destination and home to Morey’s Piers. Islander lasted a few years before closing up; it was left abandoned and is now home to some trailers and the remnants of the park. 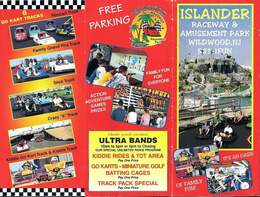 Here’s the first set of pages. On the left they pitch their assortment of go-kart tracks, which was the main attraction of this place. I like how they call those mini plastic electric cars “kiddie go karts.”

In the center they showcase some carnival games; eh, the boardwalk has plenty of those. They also have “Ultra Bands” which are actually pretty mediocre in the grand scheme of things.

Finally on the right is the actual cover. The park claims to be in Wildwood but is actually in Middle Township. That’s forgivable; many other parks use a nearby city or town as their location. 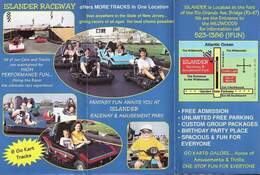 Go karts, go karts, and that stupid kid in sunglasses again. They probably weren’t BS’ing when they say that they have more tracks in one place than any other park in New Jersey, at least with Action Park gone. That being said, go karts are pretty low on the amusement park attractions totem pole; just above the inflatable slide and those standalone Spin the Apple pods.

I don’t know what the hell “fantasy fun awaits…” is supposed to mean; there is nothing fantasmal about this park. Maybe will-o’-wisps came out of the swamps at night or something, I don’t know.

To the right is a map that shows Wildwood as a tiny sliver of land, “traffic light” as a place, and Islander as a huge park that dwarfs anything around it. This is actually how it was; Wildwood has changed a lot since hurricane Sandy, eh? 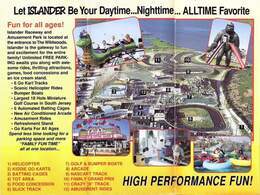 Here’s a map of the park taken from an overhead photo. As you can see, the park was thrown together, dusty, and it was situated around a marsh which meant that it smelled like ass all the time. At one time this place had a huge Slingshot ride called “Rocket.” After the ride closed (possibly due to the Slingshot accident at Steel Pier in Atlantic City), it basically just stood there not operating. The ride actually blended in with a radio tower on the property, so that was something.

Jerseyans take note of the gorilla slide thing, it was featured in Weird NJ once! I find it hard to believe that Islander could be anyone’s “all time favorite” park considering that Morey’s Piers is right down the road, and even that place blows compared to Great Adventure.

They also have a photo from inside their giant arcade. I actually find that photo hugely underselling of the arcade because I remember it being a huge, high ceilinged, windowless white room with a ton of games stuffed in it. I distinctly remember the cacophony of noise generated from each game going at the same time as well. As a 12 year old, I was awestruck. 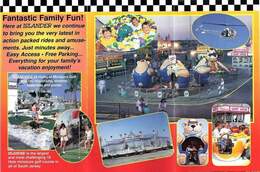 On the last page the brochure shows off their mediocre ride collection along with a passing blurb about their adventure mini golf’ course. I personally think mini golf was the main draw of the park, despite all the go kart tracks they liked to show off. Unlike the rest of the park, Islander’s mini golf was really well made with waterfalls, caverns, and rock formations; it was also hard as hell! I think this was the course that listed par 5 for every hole; a bad mini golfer (like myself) knows they’re in trouble when they see that!

And there you have it, Islander…a blast from the mid 90s past.