Whew! Twenty weeks have gone by since the first Crapstravaganza! With park opening dates rapidly approaching, the Crapstravaganza series will be coming to a close next week in favor of trip reports and the like. Now after several weeks of Disney park maps, let’s switch gears to a more homey park, in this case Hersheypark. While the park is certainly corporate owned, the place does have a small park feel to it; at least I thought so. I haven’t been to the park in 10 years now (which without a doubt will change this season) so it may have gotten more cut and dry.

All right, let’s see what we’ve got here…

Featured on the cover is Great Bear, Hersheypark’s most recent ‘big’ addition as of 1999. Great Bear is a B&M inverted coaster with a nice sprawling type of layout, unlike most B&M loopers that are fairly contained into one area. The coaster features four inversions and a helix before the initial drop as well. The coaster also has some wild ass support structures due to the fact that no footers could be placed into the stream that the ride was built around.

The image has also been mucked around with a bit. The image shows Great Bear’s zero-G roll, but it’s been turned on it’s end and compressed to make it look like some sort of death spiral. Perhaps an element that could be found on a coaster at Un-PC Park! 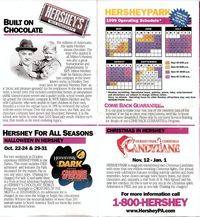 This is the back page (right) and one of the middle pages (left.) The page on the left has a brief story of the Hershey company and Hersheypark. It tells about how the park was built in 1907 and how the town thrived from the park. The moral of the story is that there’s international notoriety and big bucks from making people fat!

On the bottom is a little blurb about Hershey’s Halloween festivities and on the right is another paragraph about their Christmas happenings. Hershey has got to be the only park this far north that actually has some rides (albeit kiddie rides) running in the Winter.

Here’s the show listings for Hersheypark circa 1999. Anyone else see those singing Hershey Kisses as being a knock-off of the California Raisins? 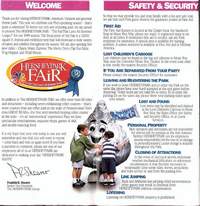 This is the first set of three pages that make up the safety and tips portion. I’ve omitted the other two sets of pages because, frankly, there’s nothing to see.

On the left is a few paragraphs supposedly written by Senior VP at the time Franklin R Shearer. He thanks you for visiting the park and then immediately switches gears to promote their new Hersheypark Fair section. Also promoted within the write up is Great Bear, which is passed off as an “astronomical experience.” I’m not sure how many people get that correlation, but Great Bear is actually the English name for the constellation Ursa Major; a constellation known for containing the Big Dipper asterism.

The page also features a couple of kids hugging a Hershey Kiss; well he ain’t no Mickey, that’s for sure! Also, listed at the bottom of the safety and security rules, is a “no loitering” rule. The definition of loiter is to “To proceed slowly or with many stops;” so technically doesn’t everyone break this rule while in the park?

Aaaaand here’s the map! There’s quite a few changes from 1999, some of them I may not even know, but the major ones are:

Some other things to note are:

The map to the left is cut from the original file (aka a huge ass image.) If you’d like to see the original map image then click here. It’s big, so you might want to ‘right click’ and select ‘open in new tab/window.’