Waterworld was set on a particularly steep section of the park. The entire section was on an incline until it leveled out a bit at the top; the end of the incline also marked the end of Waterworld. The first slide you saw back in the Action Park days was Kamikaze, a simple three dip body slide that was built into the hill. There would be a short, straight section after each dip that would dissipate your speed in preparation for the next drop. Depending on how heavy you are, you could catch some air on the final dip. This was, however, the least dangerous or wild slide in Action Park.

On the left, down a nondescript path, was where the Tarzan Swings were located. A pair of slides, named Cannonball Falls, sat right next to the Tarzan Swings in a separate pool; both sitting in a densely wooded ravine. Just below the Tarzan Swings was a small stage area for shows. I distinctly remember looking at the board in front of the show venue with Marc Weiner (of Weinerville on Nickelodeon fame) of all people billed to perform. Continuing the hike up to the top of hill, you’d first come across Aerodium on the left and finally by a grouping of vertical slides called Geronimo Falls. 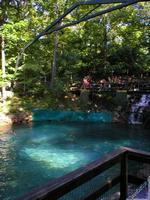 Lets start off with the Tarzan Swings which were, and probably still are, a spectacle of pain. The swing was huge first off; the beam to hold them must have hovered 30 feet above the water. Usually these Tarzan swing type things have a 6 foot drop at most. The swing platforms here had to have been around 15 feet high. There were three swings, each consisting of a cable attached to a triangular shaped grab bar.

The goal of this attraction was to successfully swing over the bulk of the water and let go at the pinnacle of your swing, but this is what would normally happen:

I remember seeing one kid not let go of the swing at all; he reached the apex of the swing and started traveling backwards before slamming into the padded wall just under the platform. He then dropped like a dead bird into the water and had to swim the entire length of the pool to get out…which is not fun at all.

While I’m at this point, I’ll talk about the pools at Action Park; simply put, they are all freezing cold. Even today in the Mountain Creek era they’re still pretty damn cold. The Roaring Springs section must have no heat whatsoever in their rock basin looking pools. After waiting in a long line in the sun, the sudden rush of cold water upon entering a pool is like a shock. Some people’s reactions reminded me of one particular episode of the Discovery Channel show Man vs Wild where survival expert Bear Grylls leapt into an ice pond and proceeded to flail around and nearly hyperventilate while trying to get out.

The worst pools were the Tarzan Swing and Cannonball Falls splash pools. Both are in an intense shade provided by the wooded surroundings, and both look like pools that were simply made from lining the ravines with plastic. The depth of each pool is around 15 feet and the shade makes it look dark and murky (thanks Mike D for the info!) When at the park, I distinctly remember the ride ops announcing that the pool was 30 feet deep, which was sort of terrifying to think about. 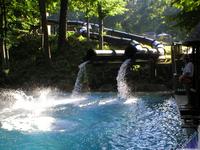 Anyway, right next to the Tarzan Swings was Cannonball Falls. This is the ride where I actually hurt myself on! Add me to one of the countless people hurt at Action Park! Cannonball Falls (or just Cannonball) were a pair of short, black tubed waterslides. I think you’re supposed to race the other person down the slide. They packed a surprising punch despite being relatively unassuming looking. Riders go down a tiny drop before sliding down a steady downward grade featuring an S shaped turn. Riders gain a lot of speed before being shot out of the tubes, which hover some 10 feet above the water. The way I was ‘hurt’ on this was when I was shot out of the tube; I fell into the pool on my side and basically landed on my arm. Nothing serious, but not comfortable either. I guess I really can’t even say I got hurt, but I’m sticking with it!

I believe Cannonball Falls were removed in the 2010s sometime. Sad 🙁

Here’s an on-ride/off-ride video of Cannonball Falls. I love how an on-ride video exists even though you can’t see anything. Thanks to BuLLNJ5 for uploading!

As you make your way past the start of the Kamikaze, you would have noticed a large round building to you’re left called Aerodium. This was one of those faux skydiving machines with the giant fan to simulate skydiving. I remember going into the building to see the people first hand attempt this feat. The noise in the building was deafening and the whole place rattled like hell when the fan was at full speed. Most people would never make it out of the building due to their inexperience. Occasionally you would see some hotshot rise up from the structure and hover 15 or 20 feet above the building.

If you make it to the top of the hill, you can turn around and see the spectacular view which overlooks many of the mountains and valleys of northern NJ, lined with tiny (and probably expensive) houses; or you could hop on Geronimo Falls, a pair of steep speed slides. I has heard that this was one of the tallest vertical drop slides in the US, only topped by “Summit Plummet,” at Disney World’s Blizzard Beach.

Geronimo Falls was purportedly the site of an Action Park death. I’ve never found the report on it, so it’s pretty suspect. The story is that some person sat up while going down the slide, despite all the warnings to lie down while riding, and tumbled off. I could see it happening to be honest.

Two things I always remembered about this slide complex were that there was like a 10 foot section of the taller slides that were covered. Perhaps they put them there to prevent someone from falling off the top (maybe the story is legit!) The complex also had a wooden bridge going over the run-out for the slides. It was a great vantage point to watch riders drop down the slide and rumble under the bridge in a mist of water. The opposite side of the bridge just lead to a tree line and some weeds from what I remember.

There are a few more slides in Waterworld, none really that spectacular. They had a couple of kiddie river rides which rarely ran. They also had this old serpentine mat slide that was built into the hill. I think they were named Sidewinder. I remember the “lifeguard” (ie. kid that stood at the top of the slide) didn’t even care about spacing out riders. He just stood there and said “go, go, go, go…” and everyone and their brother piled down the slide. I waited a sec before heading down myself. The slide itself was pretty neat with a couple of tunnels. You could go pretty fast, barring you don’t fold over the mat or something.

Funnily enough, back in 2004 or so at Mountain Creek, I was talking to one of the lifeguards at the top of Sidewinder. I asked if I should go down and the bleach blond surfer looking kid said: “um…you know just wait a second because I’m not sure. I sort of just guess. (chuckle)” Some things never change.

DoD3 reader Ari F. has a wild story to share about the seemingly un-assuming Serpentine/Sidewinder Slides:

Back in the late 80s I went to Action park with my family; I must have been 15 or so at the time. The Serpentine was the first ride I went on. I got to the top, the lifeguard said “go”, and off I went. Of course no one told me you have to curl up the front of the mat. Not curling up the front of the mat results in vastly reduced speeds. In fact the slide was built in such a way that if you didn’t have sufficient speed around certain turns you just stopped and you had to push yourself down until you built up enough momentum. Well that is what happened to me. Which would have been bad enough but the fun didn’t end there…

After I slowed to a crawl and began pushing my way down, I briefly took a look back over my shoulder behind me and I see a 250 pound woman rounding the last turn coming at me at top speed. All she has time to do is say “Hold on to your mat Kid!” and it was a good thing she did. I complied and shut my eyes tight and ‘Pow!’ she slammed right into me. We raced down the rest of the slide at top speed. I screamed the whole way down. I felt like that bald guy in Mad Max Beyond Thunderdome who ends up riding on the front of the speeding train.

So we are flying down the slide and then I begin to think “What the hell is going to happen in the splash pool! This lady is going to squash me.” So I prepared myself and just as we hit the splash pool I pushed downward and she flew right over me. We both smiled and went our merry ways, both happy that I avoided injury. 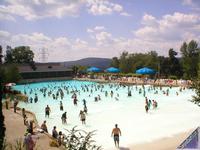 If you go all the way to the top of the path, you’ll stumble upon the giant wave pool. Somebody died here as well! It seemed like a fairly tame wave pool, but it apparently had some sort of odd rip-tide which led to unprecedented numbers of rescues each year. Maybe that’s just BS, I don’t know. One thing I remember was that the entrance to the pool section had these posts with sprayers that shot freezing cold water. The water in the pool was also cold, even though it’s in direct sunlight.

If you go up a nondescript stairway to the left of the pool, you’ll come to the Surf Hill racing slides (renamed Riptide in the Mountain Creek era.) Surf Hill was one of those giant 8 lane racing slides with maybe 3 or 4 dips to traverse. The slide was built into a massive hill and had lengthy straightaways between drops. Like the aforementioned Sidewinder slides, these too were ridden headfirst on mats.

Despite having plenty of room for the slide and straightaways, they didn’t leave much room for a straight section to end the slide. Instead, Surf Hill had short water filled pits in each lane followed by a large curved wall covered with slick padding. If you’re going too slowly, you’ll slam into the pit of water and the mat will smack you in the face; too fast and you’ll fly across the pit like a rock skipping across water and slide up the wall before tumbling down. It was kind of a lose/lose situation.

Check out the comments section below for a bunch of great Surf Hill stories; it seemed to be right up there with the “best” of Action Park!